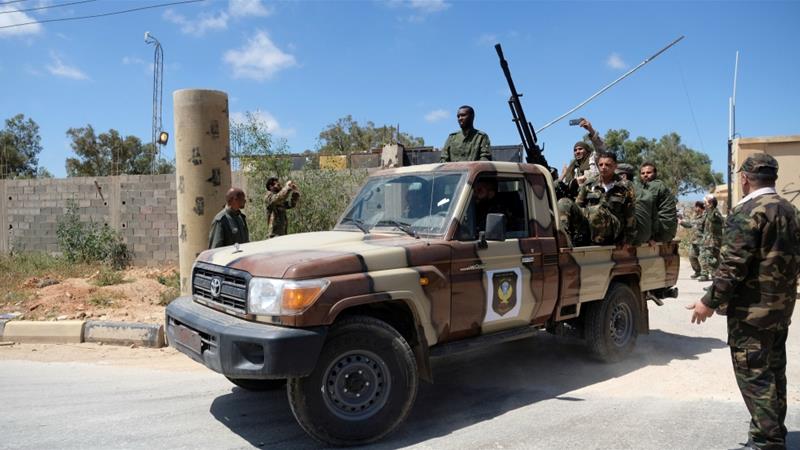 Officials with Libya’s internationally-recognised government say at least seven civilians in Tripoli have been killed in renewed shelling which they blamed on eastern-based forces seeking to seize the capital.

Amin al-Hashemi, a spokesman for the health ministry of the Government of National Accord (GNA), said the shelling late on Saturday by the forces of renegade military commander Khalifa Haftar hit a shelter for displaced people in Tripoli’s Fornaj district.

A five-year-old boy from Bangladesh was among those killed, according to al-Hashemi who wrote on Twitter that 17 other civilians were also wounded in the shelling.

Located near a front line, Fornaj district is home to people displaced during earlier bouts of fighting, according to Usama Ali, spokesman for Tripoli’s emergency and ambulance service.

The emergency services were attempting to evacuate the shelter of the remaining displaced people and relocate them elsewhere in the city, Ali was quoted as saying by Reuters News Agency.

Oil-rich Libya has been mired in chaos since longtime ruler Muammar Gaddafi was overthrown in a NATO-backed uprising in 2011.

It has since been split between two rival administrations: The internationally-recognised GNA based in Tripoli, and a parallel eastern-based administration allied to Haftar. Both are backed by international actors, who have on numerous occasions pledged to end their support for the warring factions.

The United Nations said last month that four-fifths of civilian casualties in Libya’s war during the first three months of 2020 were attributable to the LNA, which is backed by the United Arab Emirates (UAE), Egypt and Russia.

The GNA has this year put the LNA onto the back foot with new help from Turkey, pushing it out of a string of towns west of Tripoli and putting it under pressure in its northwestern strongholds of Tarhouna and al-Watiya airbase.

Turkish support for the GNA has been most effective through its deployment of anti-aircraft defences, and with its drones that have hammered LNA efforts to resupply the northwest battlefronts from the east.