Attack is the latest to target Mitiga, the only functioning airport in Libya’s capital. 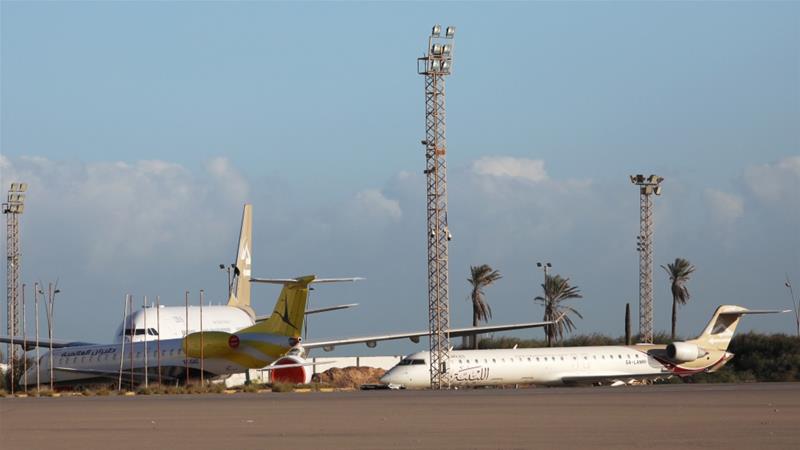 Forces loyal to Libyan renegade military commander Khalifa Haftar have fired a barrage of rockets at Tripoli’s only functioning airport.

The attack on Saturday was the latest to target Mitiga International Airport in Libya’s capital, the seat of the country’s internationally-recognised Government of National Accord (GNA). Haftar’s eastern-based forces have been trying to seize Tripoli since April last year.

There were no immediate reports of deaths or injuries after “dozens of rockets” hit the airport, Al Jazeera’s Mahmoud Abdelwahed, reporting from Tripoli, said.

He added that smoke was seen “coming out of Mitiga” and buildings were on fire.

“Many families are out on the streets in a state of panic,” he added.

The airport has repeatedly been attacked by Haftar’s self-styled Libyan National Army (LNA), which in April last year launched an operation to capture Tripoli from the GNA.

“Haftar’s forces say that there is a drone launcher in that airport … Turkish drones to target Haftar forces’ locations in the south and many other locations,” Abdelwahed said.

Turkey supports the GNA and has signed a military cooperation agreement with it to help the fight against Haftar’s LNA, which is backed by the United Arab Emirates (UAE) and other countries.

The attack came days after at least five civilians were killed in shelling blamed on the LNA and followed the launch of an operation by the GNA to seize the key al-Watiya airbase, southwest of Tripoli, from Haftar’s forces.

Haftar’s fighters have suffered a series of setbacks in recent weeks in their year-long campaign to seize Tripoli, with pro-GNA forces expelling them from two key coastal cities west of the capital.

The LNA’s military defeats have coincided with Turkey’s entrance into the conflict, and its use of weaponised drones targetting Haftar’s troops and supply lines.

The GNA rejected Haftar’s unilateral call for a ceasefire during the Muslim holy month of Ramadan for fear he would use the truce as an opportunity to regroup.

Last month, the United Nations, the European Union and several countries called on Libya’s warring sides to lay down their arms during Ramadan.

Libya has been in turmoil since 2011, when a NATO-backed uprising toppled longtime leader Muammar Gaddafi, who was later killed.

For years, the country has been split between rival administrations in the east and the west, each backed by armed groups supported by an array of foreign powers.