Home » World News » Her Plan for Putting the World Back Together? Trees.

Diana Beresford-Kroeger’s connection to trees stems from an ancient Irish prophecy she heard in childhood. And she thinks trees are crucial in addressing climate change. 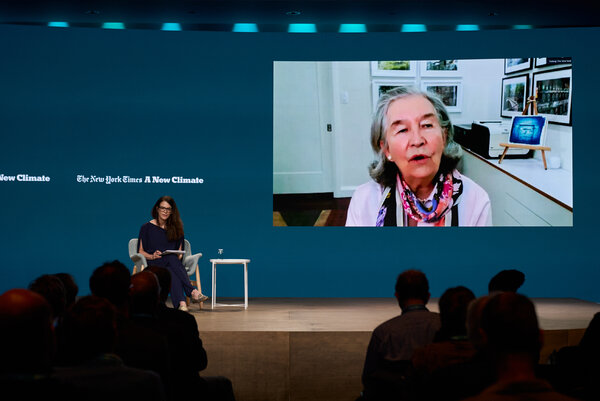 She is a botanist, a medical biochemist and a climate visionary.

She was also raised learning about ancient Irish ecological knowledge and reverence for forests. Before the Times reporter Cara Buckley wrote an article about her, Diana Beresford-Kroeger told Ms. Buckley, “What you must do is lean against a tree before you write the piece.” And Ms. Buckley did.

Ms. Beresford-Kroeger has dedicated much of her life to preserving the planet and revealing the countless ways in which plants and trees support human health and souls. Her connection with the natural world is based on her vast scientific understanding of it and her deep spiritual connection with forests. One of her champions included biodiversity pioneer E.O. Wilson, who died last year.

She is also known for being fictionalized in Richard Powers’s Pulitzer-winning book “The Overstory.” Ms. Beresford-Kroeger spoke with Ms. Buckley in conversation at a Times climate event in October, joining virtually from Ontario, where she lives. She spoke with gusto about our spiritual connection to trees, about why we should preserve old forests at all costs and plant more, and about the prophecy she learned as an orphan in Ireland, which she says shaped her life and spurred her environmental work. Watch the full conversation.

The following are edited excerpts from the conversation.

Cara Buckley: I want to start with your personal story, the foundation of all the great work you’ve done. Can you tell us where you grew up and what were your first encounters with the plant world?

Diana Beresford-Kroeger: Well, I was born in England. I’m Anglo-Irish. I’m an aristocratic mongrel on my mother’s side and my father’s side. And then I went to school in Ireland, and my family were killed when I was about 11, in a car crash, and I was made an orphan.

My castle family home is the castle of Ross. My mother’s family brought me under Brehon laws. These are old, old Celtic laws. And everybody listening to me right now: These are the laws that your forefathers knew and understood about the environment. So I was brought in a three-year wardship and tutored in these laws and in these medicines and in the ancient script.

Shift to clean energy. The energy crisis sparked by Russia’s invasion of Ukraine is likely to speed up rather than slow down the global transition away from fossil fuels and toward cleaner technologies like wind, solar and electric vehicles, the International Energy Agency said in its annual World Energy Outlook, a 524-page report that forecasts global energy trends to 2050.

Climate pledges fall short. Countries are failing to live up to their commitments to fight climate change, pointing Earth toward a future marked by more intense fires, drought and other havoc, according to a new U.N. report. Just 26 of 193 nations that agreed last year to step up their climate actions have followed through with more ambitious plans.

Protest tactics spark debate. Desperate to end complacency about the climate crisis, some climate activists are resorting to high profile tactics, like throwing food at priceless artwork in museums. The actions have gone viral and set off an international storm of outrage and debate.

Shifting patterns. The melting of the snowpack in the high Cascades has long been a source of sustenance in the Pacific Northwest. But as climate change makes seasons less predictable and precipitation more variable, people there are reimagining the region’s future and the tools that will be needed to manage it.

Facing drought. The story of the Netherlands’ long struggles against excess water is written all over its boggy landscape. Now that climate change is drying it out, the Dutch are hoping to engineer once again their way to safety — only this time, by figuring out how to hold onto water instead of flushing it out.

U.N. research shows that to keep warming below 1.5 degrees Celsius, we’ll need to remove about six billion tons of carbon dioxide from the atmosphere by 2050, the same as annual U.S. emissions today. You told me that trees are the best and the only thing we have right now to fight climate change cheaply and do it fast. But there’s only so much arable land, and trees are said to provide only half of the removal needed. Do you agree that there’s not enough land to plant the trees we need?

No, I don’t agree with that. In the United States, you had the terrible dust storms of the 1930s, and we’re actually returning to this. And you had a president called Roosevelt, and Roosevelt was very smart. He got a huge group of people out planting a gleditsia species. They’re a honey locust. They’re the inermis species of honey locust. And there’s all kinds of research done around those honey locusts. It stopped the storms from destroying the farming land, and they were planted all over the United States. So a lot of them are gone now. And let me say to you: There are trees that can grow on almost nothing. We need those trees. Some trees are feeding trees. Some trees produce all kinds of nuts and all kinds of other things that the farming community can get the benefit from.

Too many trees, too many forests all over the world have come down too much. When we were taking down these forests, we did not know that they were molecular machines. And they are intelligent machines that are capable of farming the photons of the sun.

We have 412, something like that, parts per million CO2 in the atmosphere right now. So if you plant, every person — this is my global bio plan for saving the planet — one tree, native species to native area, for the next six years, you will have in the ballpark of 50 billion trees put back into the planet. You will pull the CO2 event down from the 410 backwards into the three hundreds. You can stabilize that in the 300s and it reduces the temperature, it reduces the greenhouse effect. It gives us time to re-regulate the carbon cycle. That’s what it will do for us. And it’s a very simple thing. It’s very cheap. You can go out and get an acorn. If you really feel that you’ve got a terribly bad back and you can’t possibly use a shovel, then go and get a trowel, get an acorn, and get your kid to plant an acorn. So it’s a very simple thing to do.

Audience member: I wondered what the experience was when Richard Powers created a fictional heroic character out of your life. And as you are a great Celtic storyteller yourself, I wonder what you think the impact of telling stories is in this movement.

But now, Richard Powers — let me tell you a very funny thing. This is a secret between you and me. Richard, me darling, Powers wrote the book, but it was sent to me way ahead of time. A lot of the publishers kind of clued in that it was me. But do you realize that an Irish woman in slang is called Patricia? And so, Beresford is my name. So the character in Powers’s book “The Overstory” was called Patricia Westerford. Beresford. See, so you get the onomatopoeia of my name throughout the book.

The only problem with poor old Richard: He should’ve blinking well interviewed me, and got a couple more things, because I’ve done a whole lot more things in surgery. I’ve made the artificial blood for tissue transplanting all over the world. I’ve made the blood for cardio research — again, all over the world. So, Richard, you could have done a little better on this little woman here, but of course, being an Irish woman, you know you have to shut up.

Cara Buckley: As a closing question, you’ve said that an understanding we need to know about the plant world starts with poetry. What do you mean by that? And do you think there’s something about nature that is inexplicable and doesn’t need explaining?

Education is very important. I brought a bunch of kids in a school with their teachers, four classes together in there. And I asked the teachers to look out the window and name the trees. This was a class of biology. Not one teacher could name any one of the trees outside the window. How can they possibly teach the kids if they don’t know how to do that?

So this is a long journey. This is a long journey, because we have to pick up where we left in destroying the world. We have to put it back together. And, of course, the prophecies are that — the Irish prophecies actually are, too — that we will put the land together. And that’s my concept of the bio plan. The bio plan is take each little part of your world around you — be it a pot on a balcony, look after that, look after the trees, look after your street, look after the people of the street. And we’ll all hold hands together, and we’ll be able to join our hands across the world. And we’re doing it right now, as a matter of fact, and that will actually save the planet.

Now, I want to give you a blessing from Ireland, and I was asked to do this when I was 12 years old. The blessing is in Gaelic, and I’ll give you a translation. And what I’m saying to you now is: “May you walk with the divine, and may you have life like yeast rising in bread. And may you rise with your life and enjoy it.” You wear those words like a mantle around you. And please remember, you have been blessed with these ancient Celtic words. Thank you.