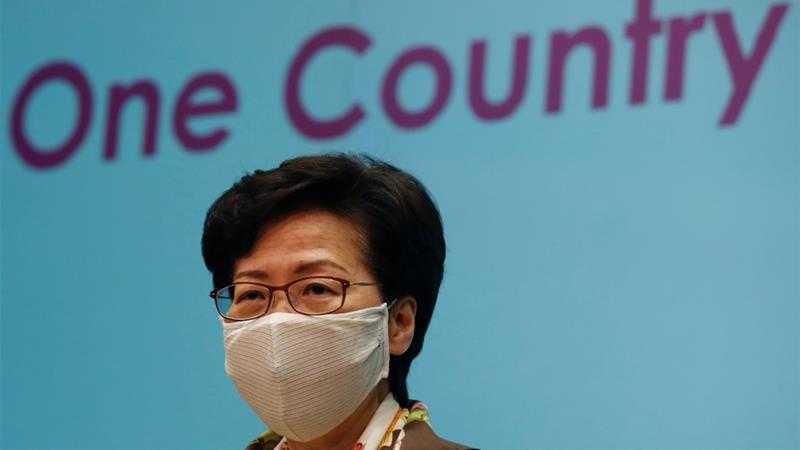 Carrie Lam, the chief executive of Hong Kong, has accused the United States of “double standards” in its response to violent protests and new national security laws planned for the territory, and warned that Washington’s plan to sanction the city would only damage its own interests.

The comments on Tuesday followed days of demonstrations in the US, some of which descended into violence and looting amid widespread anger over the death of George Floyd, an unarmed Black man who died in police custody last week. In many US states, soldiers were on the streets to quell the violence.

“There are riots in the US – we are seeing how local governments are reacting. When we had similar riots in Hong Kong, we saw what position they adopted then.”

The semi-autonomous Chinese city was rocked last year by months of mass protests, which riot police stamped out with more than 9,000 arrests. The US was critical of Hong Kong’s response, and tensions have ratcheted up in recent weeks after China said it would impose national security laws aimed at tackling secession, subversion, “terrorism” and foreign interference in the territory.

The law, which is yet to be drafted, will bypass Hong Kong’s legislature and allow Chinese security agencies to operate in the city. Critics have said the law will mean the end of the “one country, two systems” framework which allows Hong Kong considerable autonomy and freedoms unknown in mainland China. US President Donald Trump last week said he would end Hong Kong’s special trading status, which was granted under a 1992 law on the condition that the city retains key freedoms and autonomy.

Lam said the move would be self-defeating and took aim at the Trump administration for its own response to the racial justice protests sweeping the US.

“Foreign governments are criticising over government,” she said. “Some have threatened action and I can only say they are adopting double standards.”

“Now, about the so-called sanctions or removing Hong Kong’s special status, these acts will only hurt themselves and do not benefit anyone.”

Some 1,300 US businesses have a presence in the international financial hub, Lam noted, generating the largest trade surplus for the US compared with any other country or territory.

Hong Kong also allows US citizens to enter without a visa, a privilege that Lam said is not reciprocated.

She did not elaborate on whether visa-free travel could be rescinded in response to any trade sanctions, but Chinese officials have pledged to implement “countermeasures” to any move by the US.

Meanwhile, US Secretary of State Mike Pompeo has said Washington is considering the option of welcoming people from Hong Kong, after the United Kingdom that it was said it was prepared to offer extended visa rights and a pathway to citizenship for almost three million Hong Kong residents.

The territory was a former British colony and was handed over to China in 1997.

When asked at the American Enterprise Institute on Friday if Washington would consider allowing Hong Kong people into the US, Pompeo said: “We are considering it. I don’t know precisely how it will play out. The British have, as you know, a different relationship. A lot of these folks have British national passports. There’s a long history between Hong Kong and the United Kingdom; it’s very different. But we’re taking a look at it.”

His remarks were shared by the State Department on Monday.

Last year, Trump approved legislation stating that Hong Kong residents may not be denied visas because they have been subjected to politically motivated arrest, detention, or other “adverse” government action.

In a statement on Monday, Pompeo said the move would apply only to graduate students and researchers “targeted, co-opted and exploited” by the Chinese government, representing “only a small subset” of such applicants.