Video recorded from a stationary CCTV monitor has exposed the moment Russian motorists were caught in the midst of a terrifying explosion on the Kerch Bridge route to Crimea. The train track that runs parallel to the road bridge at a slightly elevated level also suffered damage as a number of oil tankers being transported set fire, triggering a huge fireball. The reason for the blast has not yet been made clear and no party has claimed responsibility for an attack on the Kerch Bridge crossing.

In the video clip which emerged on social media, the flames from the explosion suddenly come to life in a huge flash of white light.

The fire engulfs the width of the road, where several cars had been filmed driving just seconds before the blast struck.

Through the smoke and flames, the headlights of an approaching motorist can be seen, trapped in the core of the fire.

On the other side of the road, drivers appear to slam on their brakes as the road ahead of them becomes suddenly blocked by a towering wall of flames. 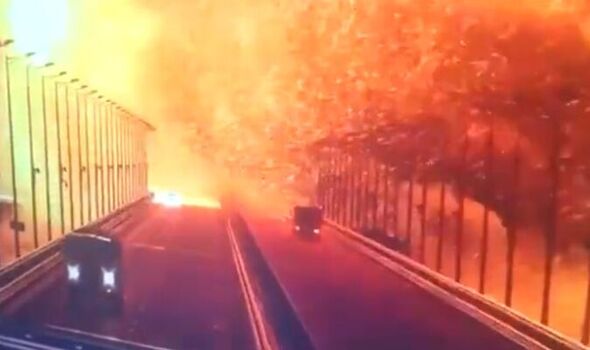 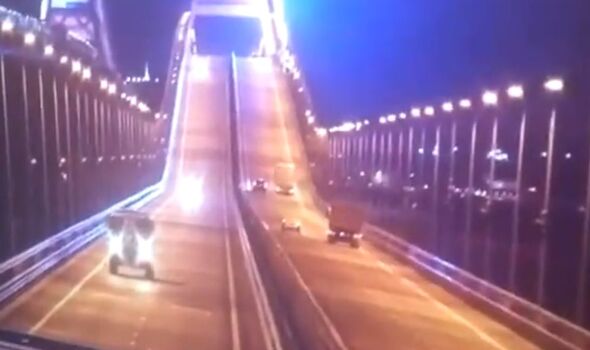 Additional footage has captured the aftermath of the explosion, which completely destroyed sections of the bridge.

Part of the road crossing has collapsed into the sea below leaving the path completely fractured in one lane.

Reports suggested a fire on the rail track has continued to burn for several hours in wake of the primary explosion.

Some video from the scene has identified what appears to be large fuel tankers that had been travelling along the rail crossing. It appears the tankers were ignited by an explosion that initially took place on the motorway section of the bridge, and this was likely the fuel behind the huge fireball seen on the CCTV recording.

Read more: Russian troops less brave than start of war as Putin on brink of loss 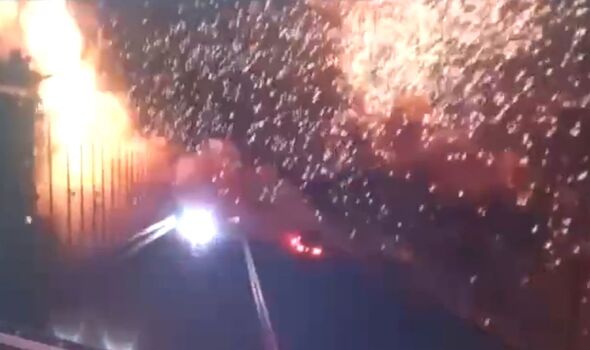 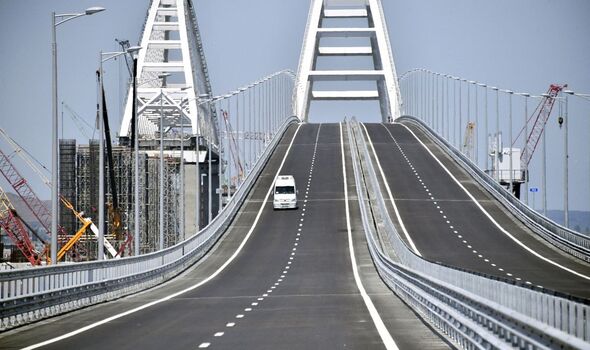 While Ukraine has not claimed responsibility for the attack, authorities have rejoiced at the news of the devastation.

The Ukrainian Secretary of the National Security and Defence Council shared a slideshow of photos of the fire, accompanied by a video of Marilyn Monroe singing Happy Birthday Mr President. The Tweet was likely a mocking nod to President Putin, who turned 70 on Friday.

Mykhailo Podolyak, an advisor to President Zelensky, also released a cryptic statement in wake of the blast.

He wrote on Twitter: “Crimea, the bridge, the beginning, Everything illegal must be destroyed, everything stolen must be returned to Ukraine, everything occupied by Russia must be expelled.”

The official account for the Ukrainian Government responded to the situation with a brief comment: “sick burn”. 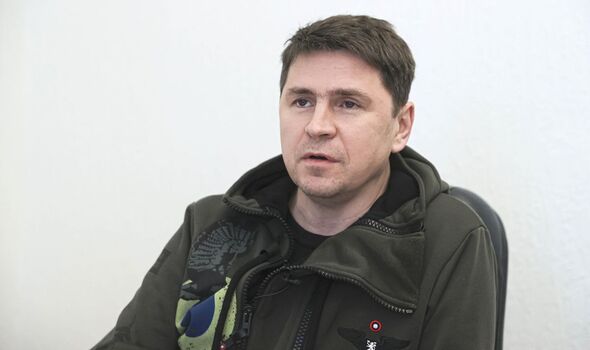 Russia’s National Anti-Terrorism Committee confirmed an explosion had erupted from a “cargo vehicle” on the motorway part of the route to Crimea.

Kremlin authorities suggested a “car bomb” was the source of the initial explosion which then ignited “seven oil tankers” located on the rail crossing, strengthening the fire. The reports from Russian agencies remain unverified.

The bridge crossing connecting Russia and Crimea was opened by President Putin in 2018 and has been used by Moscow’s armed forces to transport military supplies to operating battalions in Ukraine. Crimea was annexed by Russia in 2014.

The Ukrainian Defence Ministry celebrated the explosion with a statement taunting Russian control in Crimea: “The guided missile cruiser Moskva and the Kerch Bridge – two notorious symbols of Russian power in Ukrainian Crimea – have gone down. What’s next in line?”