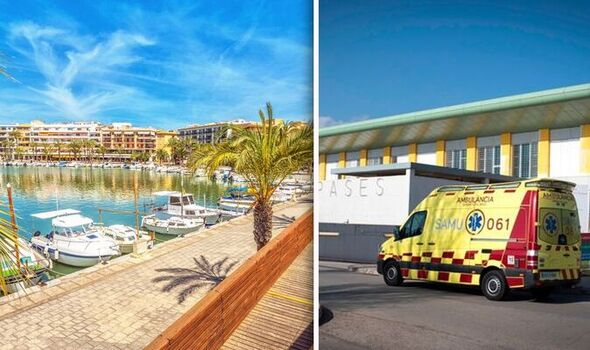 The tot’s parents found the body of the youngster in a hotel pool in Port d’Alcudia, Majorca. The incident took place on Tuesday at about 7pm local time, according to Spanish media outlet Ultima Hora.

The baby was reportedly found in a critical condition in the water. A lifeguard carried out first aid as the emergency services including the Civil Guard and an ambulance raced to the scene.

Local media reported she was revived after an hour of CPR, intubated and transferred in a critical condition to Son Espases hospital.

However, while in ICU the little girl tragically died. Her death was confirmed at 5pm on Thursday.

It comes after a seven-year-old girl was left fighting for her life when she almost drowned at a hotel pool in the same region two months ago.

A six-year-old British boy scout had also died at another Majorca resort after he drowned in a pool.

Ultima Hora reports that so far this summer more than 20 people have drowned in the Balearic Islands.

Emergency services have been called to 47 separate incidents.

Some 30 percent of those cases have been children under the age of seven, according to Ultima Hora.

READ MORE ABOUT MICK LYNCH BEING SAVAGED BY UKRAINE

This week saw the grieving father of a girl who died in a water park claim she was “left to drown” by staff who he believes did not act quickly enough.

Kyra Hill, 11, died after attending a party at Liquid Leisure near Windsor, Berkshire, on August 6.

Emergency services were called at 3.55pm and Kyra was found just after 5.10pm. She was rushed to Wexham Park Hospital where she died.

Her father Leonard Hill said his family had been “ripped to pieces” by the incident and he is “100 percent sure Kyra could have been saved” if staff at the water park had “acted sooner and more urgently”.

He told Sky News: “I feel really, really let down. I’m so sad that she’s gone, because me and her have an unbreakable bond, we’re that tight.

“They’ve ripped one of my closest people to me in life away from me because they haven’t acted in urgency.”

Mr Hill previously said Kyra had not been playing on inflatables and was swimming in the area designated for swimming.

He told Sky she was in a nine-by-12 metre pool.

He said: “I would say she was left to drown, because there’s no way she could have gone down in that same body of water and it’s taken you over 30 minutes to contact the emergency services.

“She had a chance, but lack of urgency, lack of interest, lack of action is the reason why my daughter is no longer here today.”

Mr Hill said Kyra’s younger brother asks about his sister every day while her sister feels cut up to have lost her best friend.

Liquid Leisure has said in a statement: “We are all devastated by the tragic incident which took place in the designated swimming area of our lake and our thoughts are with the family and all those affected.

“We are fully co-operating with the authorities and the ongoing investigation and we will provide further updates when we can.”