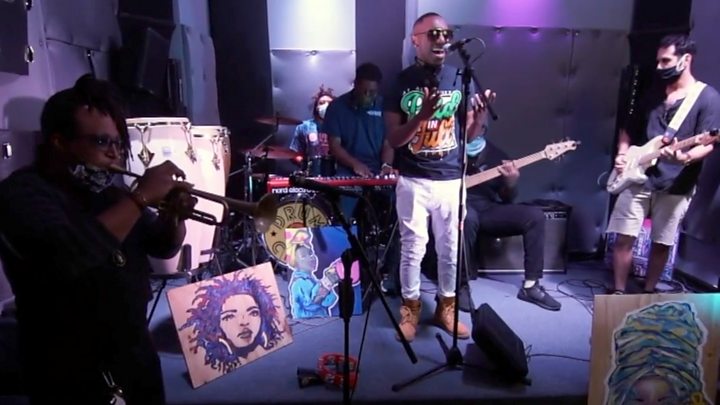 A slogan chanted by tens of thousands around the world, Black Lives Matter has sparked a hashtag, a network of grass-roots organisations, and a moral collective of activists.

But how did it go from a social media post to a global phenomenon, and where does it go now?

The names most associated with Black Lives Matter are not its leaders but the victims who have drawn attention to the massive issues of racism this country grapples with: George Floyd, Breonna Taylor, Eric Garner, Michael Brown, to name a few.

The movement can be traced back to 2013, after the acquittal of George Zimmerman, who shot and killed Trayvon Martin in Florida.

The 17-year-old had been returning from a shop after buying sweets and iced tea. Mr Zimmerman claimed the unarmed black teenager had looked suspicious.

There was outrage when he was found not guilty of murder, and a Facebook post entitled “Black Lives Matter” captured a mood and sparked action.

“Seven years ago, we were called together. There were about 30 of us standing in the courtyard of this black artist community in Los Angeles, summoned by Patrisse Cullors, one of our co-founders and one of my dearest friends,” says Melina Abdullah, a professor of Pan African Studies in Los Angeles and co-founder of one of Black Lives Matters first “chapters”.

“It was students … artists, organisers and mommas. We knew that it was part of our sacred duty to step up. And there was an audaciousness that we could transform the world, but we didn’t have a plan for it,” she laughs.

If calls for justice for Trayvon Martin lit the spark for Black Lives Matter, it was the death of Michael Brown a year later that really brought the movement to national attention.

The unarmed teenager had been shot dead by an officer in Ferguson, Missouri and Black Lives Matter took to the streets, often in angry confrontation with the police.

But the killing of George Floyd took the movement to areas it had not reached before.

“Especially that they have remained overwhelmingly nonviolent,” the 88-year-old says.

For years he marched shoulder-to-shoulder with Rev Martin Luther King Jr, but very much as a civil rights leader in his own right.

He was later awarded the US Presidential Medal of Freedom and served as US Ambassador to the United Nations.

“Of course it was very different back then. We had to go door-to-door, church-to-church,” he says.

“When Dr King went to jail, only 55 people showed up,” Ambassador Young remembers.

In the 1960s, many of the key American civil rights figures were known the world over, but even someone as connected to the struggle for equality as Ambassador Young finds it hard to name contemporaries in the modern movement.

“Honestly, I don’t know who Black Lives Matter is,” he acknowledges.

“I don’t know who the leaders are. In fact, I don’t know that they even have any leaders. I think perhaps it’s a spiritual, emotional movement created by implicit evils in our society that we have not been willing to face.”

Those who have been involved with Black Lives Matter since its embryonic stages say this decentralized approach is intentional.

“Group-centred leadership is in our guiding principles,” says Prof Abdullah.

“Leadership is not just about oratory, it’s also about facilitation, planning, bringing arts to the movement, things that don’t get as much recognition,” she says.

The leadership in many Black Lives Matter chapters is also often female.

“Black women have always been at the heart of the black freedom struggle. Often times they have been painted over, and this time we are refusing to allow ourselves to be painted over,” says Prof Abdullah.

The guiding light for this doctrine, and for Black Lives Matter as a whole, she says, has been Ella Baker – the feminist civil rights leader who championed collective grassroots activism over activism focused on a single leader.

“We all study Ella Baker as one of the most brilliant organisers to have ever walked the face of this earth. She was clear that movements should be bigger than individuals.”

Though Black Lives Matter has evolved into this loose national and international umbrella network, the Black Lives Matter Global Network is registered in the US as a non-profit organisation, one that is now getting grants and pledges from foundations and corporations falling over themselves to ally themselves with the movement.

Chapters of Black Lives Matter have spread across the US and around the globe, with massive protests in the UK, Europe, and Canada.

The movement now includes many of diverse backgrounds, who had previously not felt connected to the cause.

“I think a lot of people in our town suddenly felt as white people we need to be really critical of ourselves and understand our role in this,” says AJ Crocker, one of the organisers of a Black Lives Matter vigil in in Norwood, Colorado, a mostly white town of about 500 people located about six hours drive from the nearest international airport.

Ms Crocker says the group is learning how they can combat racism in their own small community, such as campaigning for an official Spanish translator for the county.

They will also bring up Black Lives Matter as a discussion topic in the town council and are reading Ibram X Kendi’s book “How to be an Antiracist” in the local book club.

“I actually really do appreciate that people are starting to educate themselves. There’s a lot of literature out there that’s pushing to educate our white counterparts on the issues that affect us and that’s good,” says Charles White, a keyboard player with Day Dream Sessions.

The band has been playing some of the songs that have become the soundtrack to the street demonstrations in Washington DC, including old protest anthems from Marvin Gaye and Sam Cooke.

But Mr White and his bandmates are also sceptical about what they sees as the mainstreaming of the movement.

“I feel like Black Lives Matter has become a trend,” says drummer and bandleader David Mooney.

“At first it was about changing the situation at hand, but now you have all these corporations saying they support black people but they’re just hoping to gain more customers and more money.”

And though some Black Lives Matter leaders deny it, over the years there has sometimes been a disconnect between the organisation itself and young black men, a constituency they are fighting for, the band says.

“I think the initial inception of Black Lives Matter is what we believed in and what we were marching behind,” says trumpeter Eric Jackson.

“It was really about police brutality and the effects of that on black people. But I think now it’s a multilayered thing with feminism and LGBTQ and all these different things kind of coupled into it. I think there needs to be a little bit of refocusing.”

“But Black Lives Matter as a message is one I still stand behind,” he insists.

Prof Abdullah though is proud of how the organisation has also been deliberately intersectional, with many women and LGBT activists at its heart.

“Black Lives Matter has been very clear that we are a womanist movement. And that doesn’t mean that we exclude men, in fact there are lots of strong male leaders,” she says.

She says the organisation is also just as concerned about tangible change, and that results are already being seen, albeit limited.

“Over the past six years, overall the number of killings at the hands of police has remained relatively stable, and that is not a good thing,” says Prof Abdullah.

“However, what we are seeing is that in cities with strong Black Lives Matter chapters, the numbers have dropped dramatically, though this has been offset by increases elsewhere.”

She says the gains have been achieved not by negotiating with police forces, which the organisation refuses to do, but by taking to the streets and making sure the police know they are being scrutinised.

Prof Abdullah says that Black Lives Matter is looking for much more, including the defunding and dismantling of the current police system in the US and its replacement with a new form of law enforcement, something for which it has received considerable criticism.

But while she says the organisation advocates one way of putting pressure on those in power, she is also supportive of chapters going their own way.

“One of the things that’s really great is that we see new Black Lives Matter chapters, popping up all over the globe. They may not be official chapters, but people are stepping into their own calling.”