Home » World News » ‘How many have to die?’ Macron shamed as UK and EU exempt from French quarantine rules

People arriving from outside the European Union, whether French or foreigners, will need to spend two weeks in isolation. Jordan Bardella, vice-president of France’s far-right Rassemblement National (RN) party, on Monday, blasted the government’s “incoherent” decision to spare travellers arriving from a country in Europe’s Schengen open-border area or Britain from a compulsory two-week coronavirus quarantine. Mr Bardella said in an interview with France 2 television: “Europe is the epicentre of the pandemic.

“Just how many people have to die before the government finally puts its obsession with open borders on the back burner?”

Denouncing the move as an “absolute aberration,” Mr Bardella, who is also a member of the European Parliament, said France should close its borders with “all countries, including those in the Schengen area”.

He said: “We cannot impose border controls within the country, but yet refuse to strengthen national border controls,” in reference to a decision to ban people from travelling more than 100 kilometres (60 miles) from their homes after the lockdown is lifted next week.

His comments came after the French consulate in Britain said on Sunday that Britons would be exempt from the quarantine.

The consulate said in a Twitter post: “People entering the French territory from countries in the European area (EU/Schengen and United Kingdom) will NOT be affected by the quarantine measure announced in France.”

People arriving from outside Europe, whether French or foreigners, will, for their part, need to spend two weeks in isolation as part of the fight against the disease. 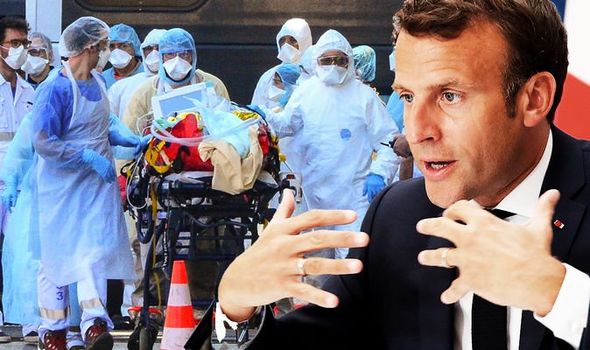 French government spokeswoman Sibeth Ndiaye said on Sunday that a list of countries at risk would soon be issued, without elaborating.

She told France Inter radio: “We’ll establish a list of countries at risk and … when people arrive from risk areas, whether they are French or foreigners, we’ll have mandatory quarantine measures.”

France, which is currently the fifth-hardest hit country with more than 25,000 deaths from the new coronavirus, is gearing up to gradually ease its strict lockdown measures.

School and business closures and drastic stay-at-home orders imposed in mid-March will begin to be lifted from May 11, but businesses like cafés and restaurants will remain closed.

President Emmanuel Macron, for his part, said on Tuesday that the French would have to “limit major international travel, even during the summer holidays” despite the deconfinement.

He told reporters during a visit to a school on the outskirts of Paris: “We will remain among Europeans and, depending on how the epidemic evolves, we might have to limit that even more.

“The virus is still here, we have not beaten it.”

The number of people who have died from a coronavirus-related infection in France rose by 330 on Tuesday, bringing the death toll to 25,531, the health ministry said in a statement.

But the number of people in hospital with the infection and the number of virus patients being treated in intensive care units has fallen sharply.