The village leader, dressed in a plain white shirt and black trousers, walking stiffly in sandals, pointed at the concrete floor where a lit candle and flowers exaggerated a dark red stain on the dull grey canvas.

“Uno,” he muttered before shuffling away. This was where someone had been murdered.

He would point out where seven more victims had been killed. Eight men in one small location. Some only teenagers.

Bullet holes marked the interior, while outside the victims’ families came together in collective grief, calling for justice for their deceased husbands, fathers and sons.

The dead men were found in the coastal town of Acapulco in the Mexican state of Guerrero, once the playground of the rich and famous (and the subject of songs by the Four Tops, Elvis Presley and Bob Dylan) but now known more for its gang violence than its sprawling golden sand beaches.

Both UK and US travel advisories recommend that tourists do not travel to Guerrero due to the level of crime and gang activity. According to the US government, “violent crime, such as homicide, kidnapping, carjacking, and robbery, is widespread.”

“There’s never been so much violence, so much murder,” Stuart Ramsay, Sky News’ chief correspondent, said on the Behind the Headline podcast.

“The police and army daily face drug cartel gangs and street violence on a par with any war zone.

“Murder is the norm here now.”

According to the Mexican government, 33,341 people were killed across the country in 2018 – the highest number ever recorded since Mexico started counting bodies. The previous record was 28,866 homicides in 2017.

Many of the victims are believed to be caught up in the ever escalating violence of the cartel drug wars.

The drug cartels were not originally birthed in Mexico; in fact, the country was previously seen as transit point for drugs to pass through from South America on their way to the US, the biggest consumer of illegal drugs in the world.

But as the US Drug Enforcement Agency (DEA) defeated South American gangs in the 1980s and 90s, extremely powerful Mexican cartels formed to fill the vacuum and started dividing the country up, controlling a sophisticated drug economy worth tens of billions of dollars.

“Mexico is a really rich country,” Ramsay said. “It will almost certainly displace Britain within the top five, top 10 [global economies], within the next few years. And that’s its real economy. Its black economy dwarfs it.”

The drugs produced in Mexico are delivered all over the world, not only in the US but to Europe and the UK as well.

“[A business magazine] did an analysis of the structure of one of the major cartels, its delivery systems, its ability to guarantee supply, its quality control. They described it as making Federal Express look like a bunch of amateurs.

“They were a completely different league.” 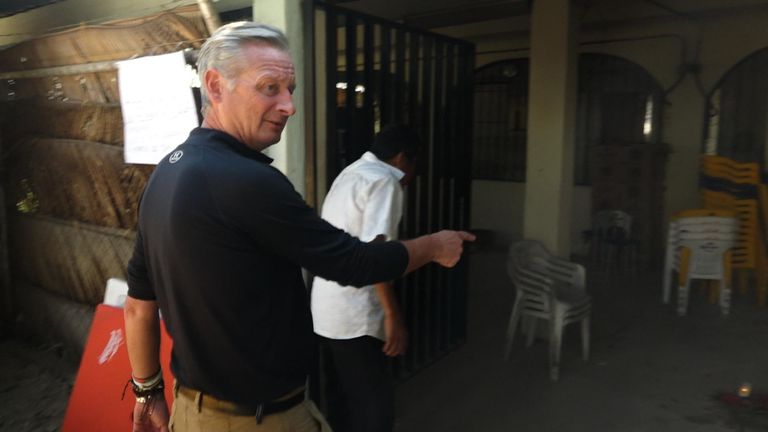 The war on drugs in Mexico has been raging since 2006.

The Mexican government believed taking out the top of the cartels would kill them, but rather than cutting the head of snake, authorities found the cartels were more like a “Hydra” (the mythological sea monster with many heads), and every time a head was cut off, more would spring up in its place.

“By taking away the leadership of cartels, you then create perhaps another dozen smaller gangs,” Ramsay explained. “For every cartel boss you take out, you have suddenly a disintegrated new crime gang and there is nobody in charge of them.

“And while the main business might be drugs, actually it’s moved on to anything; extortion, kidnapping, blackmail, anything you can think of is now part of the crime gang movement.”

The violence from the war on drugs has now infected the rest of Mexican society. Many of the major companies within Mexico are completely legitimate. But the money that started it, or washes through it, is not legitimate at all.

Some politicians and law enforcement are also under the influence of the cartels. In 2018, the entire police force of the Mexican town of Ocampo, Michoacan, was arrested on suspicion of involvement in the assassination of a mayoral candidate. 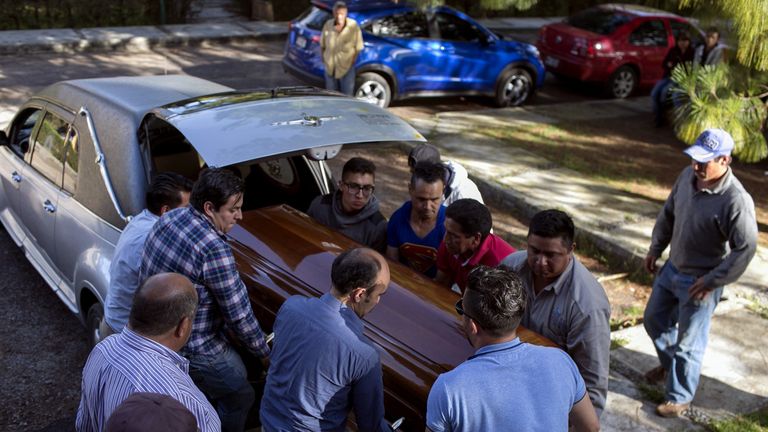 Even normal people in their everyday lives are resorting to cartel methods to settle conflicts.

“There was a woman whose husband was taken, was kidnapped and [the crime gang] was trying to get a ransom payment for her husband,” Ramsay said. “So, she went and took the mother of the crime gang’s boss.

“She said, ‘You give me my husband back and I’ll give you your mother back and until you do you’ll start getting parts of your mother back’, which indeed he got. He got two fingers back. Then the husband was released.

“In a way that explains just how violent it is. This is a perfectly normal law-abiding woman who just copied the gangs and did exactly the same thing.” 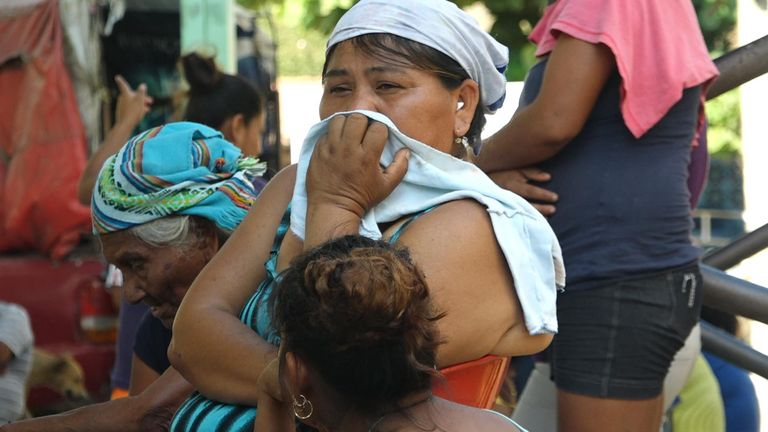 To investigate the drug gangs, Ramsay and his team went to spend time with the alleged head of a cartel, Ruben Granados, in the mountains of Guerrero where some of the drugs that are causing all this violence and death are produced.

“He says he’s the head of a farmers’ union,” Ramsay said. “The government, though, think he’s a cartel boss and sent the army in with three Blackhawk helicopters to arrest him. He beat the charges. He claims the government and the real cartels are responsible for all the drug business, not him.”

“We live in a very complicated and testing country because the crime gangs extort kidnap and kill,” Granados told Ramsay in his first ever interview.

“The government is hand-in-hand with them because the gangs pay them. If you’re a criminal the government likes you. If you are honest people, the government wants to destroy you. This is how we have to live.”

“One of the signs of somebody who really is a potential cartel boss is that there’s usually a folk song about him,” Ramsay said. “I think he has about three. And they’re all Robin Hood type of songs as a rule.” 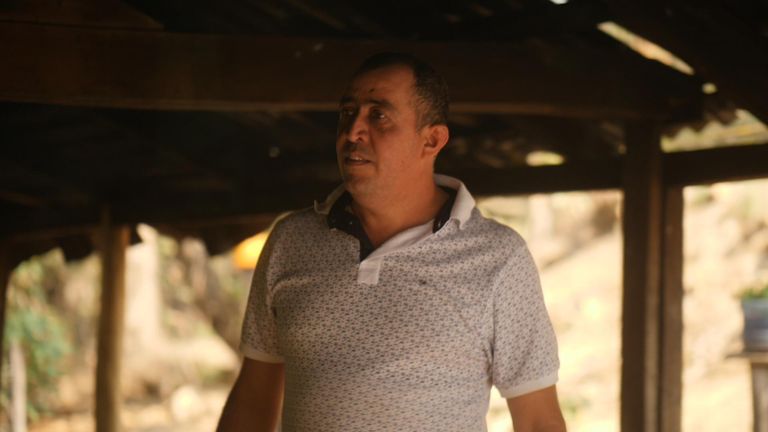 The meeting took 12 months to set up as the cartels are extremely secretive and therefore reporting on them is incredibly dangerous. Ten journalists are believed to have been among those murdered in 2018.

“[Granados] wanted us to interview him because he believes that he’s been wronged,” Ramsay said. “Whether he is or isn’t is not open to negotiation and discussion and interpretation.

“He could have just shot and disappeared us and no one would ever know the difference.”

Granados, who Ramsay describes as a Tony Sopranos-type figure, lives in a modest home with his second wife. From here, he runs a small cartel that is coming under pressure from bigger cartels as the mountain region they control has an unusual ability to grow poppies, which in turn yields a lot of opium.

And given that 90% of the heroin consumed in the US comes from Mexico, control of the poppy fields is big business.

Granados’s previous wife and two sons were killed years ago by a rival cartel.

“It’s hard to produce the amount of stuff they produce,” Ramsay explains. “The fields are small when they have them up in the mountains. So, from the air they’re almost always in clouds, but it still grows very well. They can grow pretty much non-stop all year.”

However, the poppy growers don’t see the connection between what they’re doing and violence that killed their boss’s family and is happening throughout Mexico in places like Acapulco.

“All of them make it clear that they are just farmers,” Ramsay said. “Ten hectares of avocado or 10 hectares of fruit can bring about $53,000 a year in.

“Ten hectares of poppy makes $350,000. So, it’s just purely economics and they really seriously have no connection, total disconnect between what they’re doing and what the effect that it’s having on society.”

As one farmer told Ramsay: “I know I’m making poison but if I don’t make this poison then my family won’t eat and they’ll die.” 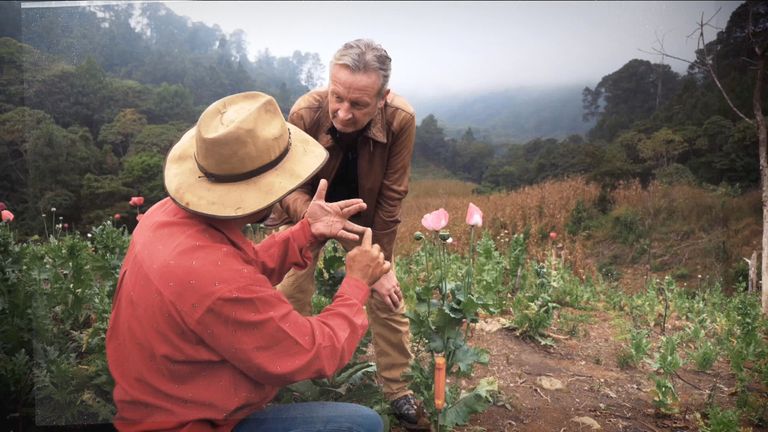 One man who is certainly responsible for a lot of the deaths in Mexico is Carlos (not his real name), a former marine who now works as a hitman.

“I met him three years ago,” Ramsay explained. “I think he was at 2,200 kills and he’s told me since then it’s been very busy.”

The violence in Mexico has become so bad that even Carlos thinks it’s become too much.

He now refuses to work for the cartels saying they’re too much trouble and instead now works for legitimate businesses such as private banks and medical companies who wish to take out opponents.

“The only way it stops is if there is a biblical flood and it washes everything away and everything starts again,” Carlos said.

“We are becoming more and more savage. 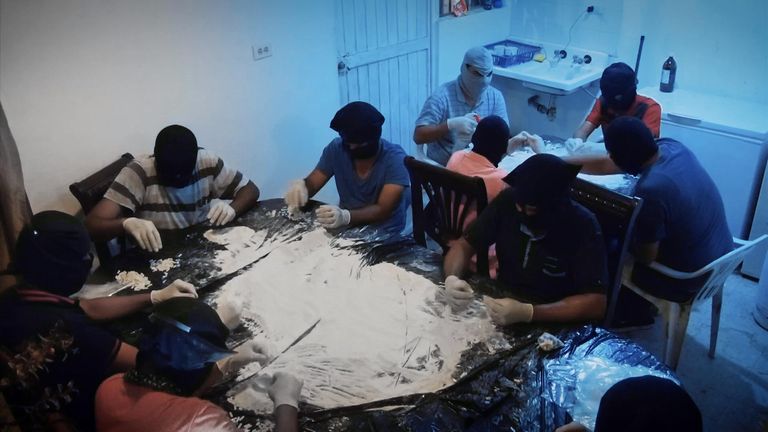 Carlos was late to a meeting with Ramsay and turned up offering an apology and explained that he had a “gig” that didn’t quite go to plan.

“The story’s so absurd that it would be funny if it wasn’t so awful,” Ramsay said. “He had to cut the head and hands off a guy [and] deliver them in a box.

“They had a car that they’d stolen to do the drive to the drop with the employer or his client, but the car broke down.”

Carlos and his accomplices decided that they’d have to take the local bus with the severed body parts; the head in a box, the hands wrapped in plastic.

“One of the gang dropped the hands, which then fell out on the floor of the bus, which people saw,” Ramsay said. “So they had to pretend that they were sort of like a gift shop joke.

“[Carlos] is laughing about this as he’s telling us and you’re sort of like, this is absolutely as crazy as it gets. And that was by way of explanation as to why he was late to our meeting.”

But while interviewing Carlos things took an even darker turn. 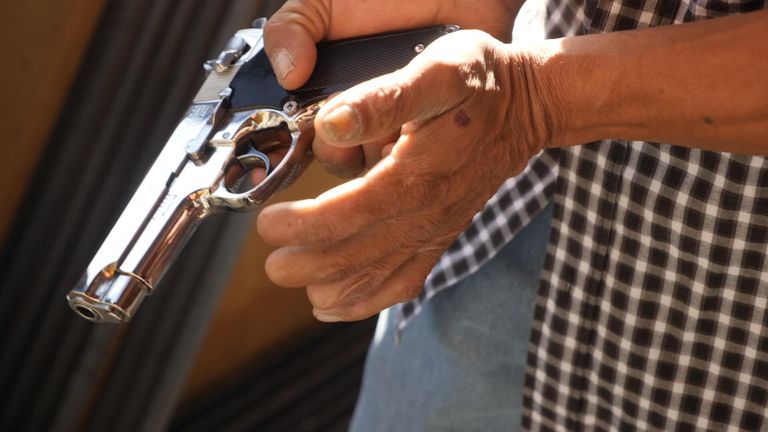 “The police turned up when we were talking to him and he had a weapon,” Ramsay said. “He doesn’t go anywhere without a weapon.

“He was loading [the gun] and this policeman arrived and we all sort of freeze in a sort of almost pantomime: ‘Oh my God where is this going to go?’ As in this is trouble, this is the law, of which he continues to load his weapon and just smiles and shrugs his shoulders and it’s like I’m going to whack this guy.

“So, although I get on really well with Carlos, it would make no difference.”

Luckily for the policeman and the Sky News team, another crime gang saw what was happening and ushered the policeman, who was on their payroll, away from Carlos.

The value of life in Mexico has lost all meaning in the war on drugs between the government and cartels. The poison produced on the mountains of Guerrero has streamed down and infected every part of Mexican society, causing the streets to flow with blood.

In the cartels’ quest for money, power and control there is no price they will not pay, no pain they will not inflict and there are no signs of them stopping anytime soon with big business, politicians and law enforcement all under their influence. Murder, something we regard in the UK as an extraordinary horror, has become a way of life in Mexico.

“It has just become so normal that nobody stands and says this is just crazy,” Ramsay said.

“When an assassin says he’s appalled, somebody should probably listen. But nobody is.”