02:30 GMT – Lebanese authorities accused of excessive use of force

As many as 10,000 protesters had gathered in Beirut’s Martyrs’ Square on Saturday, some throwing stones at police, according to reports and social media posts.

Police fired tear gas when some protesters tried to break through the barrier blocking a street leading to parliament, a Reuters journalist said.

Police confirmed shots and rubber bullets had been fired. It was not immediately clear who fired the shots. Riot police shot dozens of teargas canisters at protesters, who hit back with firecrackers and stones.

00:10 GMT – Lebanese authorities accused of excessive use of force

At least 14 journalists and other media workers have been attacked while covering the latest protests in Lebanon, according to a journalist for the independent news website The Public Source.

Authorities have been accused of using excessive force against the protesters, who were demonstrating against government inaction following the deadly blast in Beirut on Tuesday.

More than 728 people have been wounded following protests in the Lebanese capital, Beirut, in response to the deadly blast that killed at least 158 people on Tuesday.

Protesters have been demanding action from the government amid the economic crisis the country is facing even before the disaster struck.

The Lebanese army drove out a group of protesters who had taken over the foreign ministry building in central Beirut hours earlier.

The demonstrators, led by retired army officers, had stormed the building and declared it the “headquarters of the revolution”, but they were expelled three hours later when large army reinforcements muscled in.

The US government supports Lebanese demonstrators’ right to peaceful protest and urges all involved to refrain from violence, the US Embassy in Beirut said.

The embassy also said in a tweet that the Lebanese people “deserve to have leaders who listen to them and change course to respond to popular demands for transparency and accountability”.

1/2 The Lebanese people have suffered too much and deserve to have leaders who listen to them and change course to respond to popular demands for transparency and accountability.

The army attacked protesters with sticks, beating a large number of them, while demonstrators responded by throwing rocks at the troops.

“Take off the suit and come stand with us, then you can wear it again with honour,” a protester said as a number of them confronted a line of soldiers.

“Tell us what you get from being with them? We really don’t understand it, why are you doing this to us?” 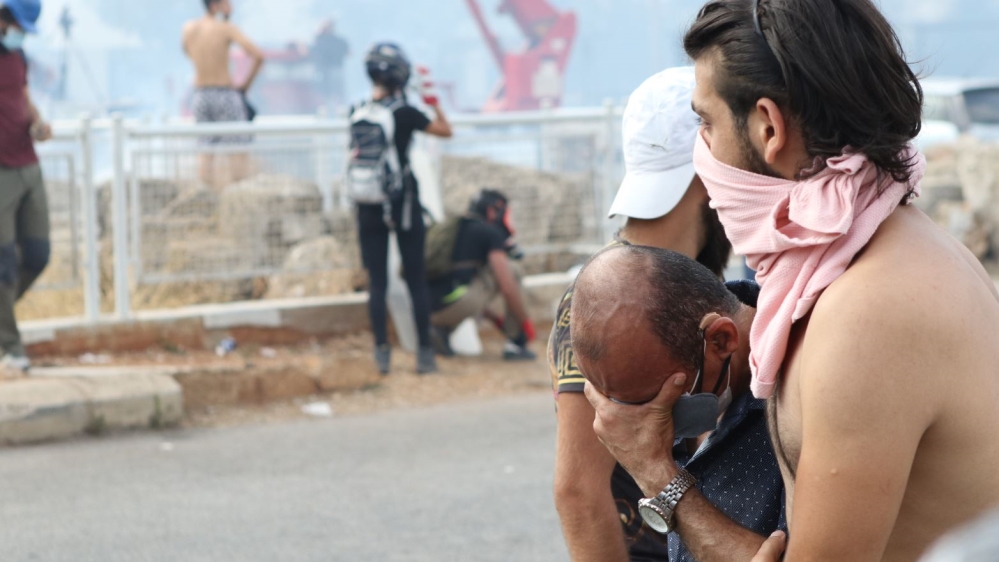 – At least 238 protesters have been wounded in central Beirut;

– 63 protesters have been transported to nearby hospitals;

– 175 others have been treated at the scene of the protests.

A group of protesters have stormed Lebanon’s Association of Banks, as well as the Lebanese energy ministry as part of their attempt to take over the country’s ministries.

Banks shut down after the #BeirutExplosions when people needed their withheld cash the most.#سبت_الإنتقام  pic.twitter.com/oxs9vYN8hC

A Lebanese policeman was killed in clashes with demonstrators in central Beirut, a police spokesman said.

The protests against the ruling political establishment have also left more than 100 people injured and dozens hospitalised.