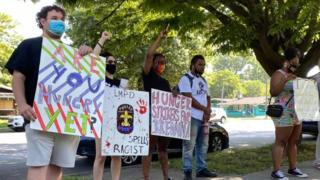 Protesters in Kentucky are on hunger strike demanding justice for Breonna Taylor, a black woman killed by police in her home in March.

The strike comes as thousands of US workers walk off the job on Monday to protest racism, inequality and police brutality.

The Strike for Black Lives builds the country-wide protests over the death of a black man, George Floyd, in May.

Many of the striking workers are considered “essential” in the pandemic.

Organisers say tens of thousands of workers in at least 25 cities are expected to protest for at least part of the work day on Monday.

Those unable to leave the job for the entire day will instead hold lunchtime rallies and will kneel for eight minutes and 46 seconds – the time that Minneapolis prosecutors initially said that ex-Officer Derek Chauvin knelt on Floyd’s neck, allegedly killing him.

Who is on hunger strike?

Four hunger strikers in Louisville, Kentucky are demanding that two city officers involved in Taylor’s death – Sgt John Mattingly and Detective Myles Cosgrove – be fired and stripped of their pensions.

Ex-Detective Brett Hankison, who was also involved in a raid on Taylor’s apartment in March, was fired but is appealing the decision.

The four strikers will live-stream their strike on their Facebook page, Hunger Strikers for Breonna.

“In this form, we can control it,” one participant, Ari Maybe, told the Courier Journal, adding that the strike will take place on private property.

“It’s not like a sit-in, where we can be arrested. It’s not like a protest, where there’s a beginning and an end. We control the beginning, the end and the entire narrative.”

She added that in addition to the four people involved, they will have support from around 35 others, including medical personnel and a crew responsible for the Facebook stream.

Who else is striking?

Fast-food servers, healthcare workers, ride-share drivers, airport workers, cleaning staff and workers from many other industries are expected to take part in a larger, separate national day of protest, which brings together a coalition of labour unions and social justice organisations.

The strikers are calling for lawmakers to create equal opportunities for racial minorities and for corporations to take stronger action to support civil rights. The diverse group is calling for higher wages for all workers as well as better healthcare access, sick leave, and child support among other demands.

In Manhattan, workers will protest outside Trump Tower, calling for Republicans to approve the Heroes Act, a second economic stimulus bill that has already been approved by the Democrat-led House of Representatives.

In Missouri, protesters will gather at a McDonald’s restaurant, then march to a memorial for Michael Brown, a black teenager who was killed by police in Ferguson, Missouri in 2014.

In Los Angeles, workers plan to lead a “car caravan” to the University of Southern California, “where they will demand the nation’s second-largest school district and the University drop their use of the [Los Angeles Police Department] on campuses”, according to a press release.

In Washington DC, transit workers are expected to participate, but officials there say it is not expected to impact train or bus services.

What happened to Breonna Taylor?

Police had suspected Taylor’s flat was being used to receive drugs by a gang based at a different address 10 miles (16km) away. One of the suspects was an ex-boyfriend of Taylor.

Shortly after midnight on 13 March, officers Hankison, Mattingly and Cosgrove entered Taylor’s apartment by executing a no-knock search warrant – a court document that authorises police to enter a home without permission.

Taylor and her partner, Kenneth Walker, were reportedly asleep as the commotion began.

Police said they knocked before using a battering ram to enter the home, though this account has been disputed by Taylor’s family and a neighbour.

The officers exchanged fire with Mr Walker, a licensed gun owner who called 911 in the belief that the drug raid was a burglary. The officers – who fired more than 25 bullets – said they returned fire after one officer was shot and wounded.

During the exchange, Taylor, an emergency medical technician, was shot eight times. She died on her hallway floor. She was 26 years old.

Mr Walker surrendered and was arrested on charges of attempted murder of a police officer, but officials have since motioned to drop the charge.

Taylor was one of three people named on the warrant, according to Louisville NBC affiliate Wave 3. But she was not the main subject of the investigation, the city’s Courier-Journal newspaper reports.

No drugs were found in the property.

Police officer Brett Hankison was accused of “blindly” firing 10 rounds into the apartment, displaying “an extreme indifference to the value of human life”.

According to the family, Taylor took “five to six minutes” to die from her injuries and did not receive urgent medical care from officers at the scene.

Timeline of US police killings