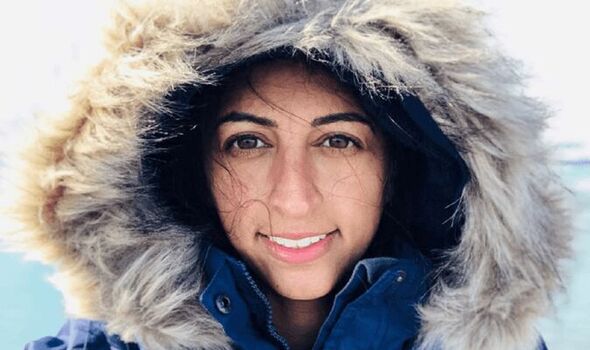 As Preet Chandi trudged through a freezing blizzard, she felt sure she couldn’t take another step. Battling -50C temperatures, she struggled forward through the snow, dragging a sled weighing nearly 90kg. Every bone in her body ached. “It’s the hardest thing I’ve ever done in my life,” says Preet, 32.

In January, she became the first woman of colour to trek solo to the South Pole. Walking and skiing in 60mph winds, she travelled 700 miles from the Hercules Inlet on the west of Antarctica to the southernmost point in the world.

When she arrived at the South Pole, Preet’s time of 40 days, seven hours and three minutes, was just a few days off the current world record.

“I felt pure elation when I reached the South Pole. I have a niece, Simran, who’s 10, and I wanted to show her that anything is possible,” says Preet, an army physiotherapist who lives in Preston with her fiance David, 31, an IT worker.

Preet says she’s always had a lust for adventure. Aged just 19, she spotted a poster for the Army reserves while walking through Leicester city centre and signed up.

After university, she joined the NHS to work as a physio, but realised her dream was to join the Army.

She quit her job and applied for a six-month post as an army physio in Kenya before being accepted for a permanent role. She’s since been on an operational tour to Sudan with the UN and worked in Nepal.

Never one to shy away from a challenge, in 2019 she completed the Marathon des Sables, running seven marathons across the Sahara Desert in blistering temperatures.

Then, in early 2020, she set herself a new challenge – to reach the South Pole.

“I didn’t have any cold weather experience, and I knew nothing about Antarctica,” says Preet.

“I’d tried skiing once before but I looked like Bambi on ice. Yet I felt sure I wanted to do it.”

Preet contacted a polar expedition company, and then started messaging polar explorers on Instagram to ask for their advice.

On a whim, she booked a training trip to Iceland and slept in her rental car while boredom as my body she travelled around the country to different ice-climbing spots.

“Friends and family were supportive but thought I was mad,” she says.

In August, she spent her life savings on a training trip to Greenland with a guide. They traversed soaring ice crevasses with ice picks, and battled the elements.

“It was incredibly tough,” she says.

During the trip, they were hit by devastating storms and had to be evacuated. “We had to ration fuel and it was freezing. I didn’t even want to eat because I couldn’t bear to go outside to go to the toilet.”

After six days, they were rescued by helicopter, and it took Preet seven months to pay off the evacuation fee.

But despite the challenges, Preet set her heart on completing her South Pole expedition.

“As a woman of colour, people often try to put boundaries on you, and I wanted to break them,” she says.

Preet started the solo journey in December 2021, pulling a sled packed with food, fuel rations and a tent.

Trudging through snow may have been beautiful, but the freezing conditions made the journey gruelling.

Mostly it was uphill. She started at sea level but the South Pole has a high altitude at 2,800 metres.

The snow was hard and had compacted into razor-sharp ridges, which towered three or four metres above her. Each day, she had to pull her sled up and down these peaks.

“It was hard,” she says. “Sometimes I’d fall down a peak and didn’t have the energy to get back up again because my body was so tired.”

Each day she walked for 12 to 13 hours and was completely alone. She walked on Nordic skis, which have a special gripper on the bottom to prevent you sliding backwards.

While a polar expedition company tracked her GPS location for emergencies, and checked in with her via satellite phone every day, she didn’t have a guide or support team.

“I was battling loneliness and boredom as well as my aching body,” she says.

To pass the time, she listened to audiobooks.

Then, in the evening, she’d set up a tent and speak to her fiance on the satellite phone for a few minutes, before heating her freeze-dried rations.

“Often I was rushing him off the phone because I couldn’t wait to warm up in front of the stove,” she laughs.

At the end of each day, she checked her feet for blisters and frostbite, and put on special sleeping socks to protect her toes.

By the end, Preet was so tired she felt delirious, and often fell down the snow ridges.

“There were days when I didn’t know if I could carry on,” she says.

Eventually, after 40 days of gruelling trekking, she trudged the final few metres in a blizzard to the South Pole.

The path ahead was lined with flags of different countries, and the shiny silver ball that marked the South Pole glinted in the harsh sun. She’d reached the southernmost point in the world.

“I was so glad I hadn’t listened to people who told me I couldn’t do it because I’d proved that I could,” she says.

At times, Preet says people in her community told her she shouldn’t be doing the expedition as it went against the expectations of a Sikh woman.

But, she says, she wanted to blaze a trail for South Asian women.

“A lot of the audiobooks I listened to along the way were by South Asian authors and I felt like I was taking the authors along with me to the South Pole,” she says.

Now, despite people’s doubts, she’s glad she took on the challenge.

“I want people to know that it’s OK to want things that are different from the family or community they were brought up in.

“I hope my journey sends that message to people.”