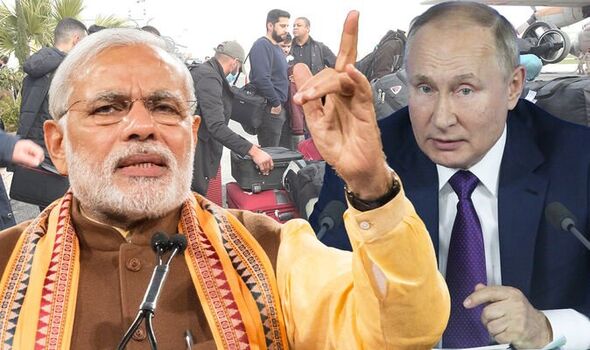 The Indian government has told its nationals to leave Kharkiv by this evening based on information the country’s authorities have received from Moscow. A spokesperson for the external affairs ministry Arindam Bagchi said Indian nationals should move to three safe zones nine miles away from Russia’s second city, which has been under intense shelling by Russian forces since Sunday.

He did not give any details on what information India had received from Russia that prompted the evacuation.

Attacks on Kharkiv have escalated in recent days with missiles hitting a school and council building on Wednesday.

Around 3,000 Indian students are thought to be in Kharkiv.

India’s foreign ministry has urged all students in the northeastern Ukrainian city to leave immediately, according to Reuters.

Mr Bagchi told reporters in New Delhi that the evacuation order was issued in response to information from Russian authorities.

He said: “We have issued this advisory based on inputs that the Russian side has given.”

The warning told students to reach nearby cities by whatever means necessary by 1600 GMT “under all circumstances”.

Indian nationals made up the largest number of foreign students in Ukraine before the war with around 76,000 students in the country.

Many have crossed the border into neighbouring Romania and Hungary where they have left on special evacuation flights arranged by the Indian government.

The Indian air force is expected to deploy a C-17 Globemaster aircraft to bring back stranded students and citizens as fighting escalates.

India has urged Russia and Ukraine to cease hostilities and stepped up demands for safe passage for its nationals.

However, New Delhi has resisted pressure from Western countries such as the US and UK to condemn Moscow’s invasion.