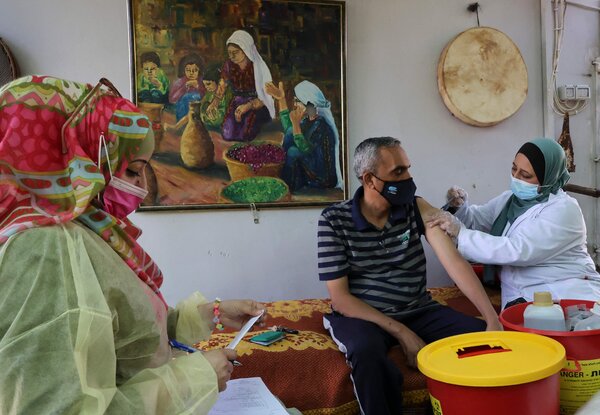 JERUSALEM — The new Israeli government announced on Friday that it would give up to 1.4 million coronavirus vaccine doses to the Palestinian Authority in a trade that will see the authority donate a similar number back to Israel once its own delayed supply arrives later in the year.

The office of Prime Minister Naftali Bennett of Israel said that the country would give the Palestinian Authority 1 to 1.4 million doses of the Pfizer-BioNTech vaccine that would otherwise have expired and that the authority would return the favor in September or October.

Negotiations over the deal began in secret several months ago, before Mr. Bennett’s government replaced that of Benjamin Netanyahu, who was replaced by a narrow vote in Parliament last Sunday.

The announcement follows months of debate about whether Israel, where a successful vaccine campaign has created a largely post-pandemic reality, has a moral or legal responsibility to give its spare vaccines to Palestinians in the West Bank and Gaza Strip, where infection rates are far higher.

In February and March, Israel gave vaccines to more than 100,000 Palestinians who work as day laborers in Israel but resisted vaccinating millions of other Palestinians living under some form of Israeli control in the West Bank and Gaza.

Instead, the Palestinian Authority ordered several hundred thousand vaccine doses from the global sharing initiative, Covax, most of which have yet to arrive. Separately, the United Arab Emirates donated tens of thousands to Palestinians in Gaza.

Israeli officials have said that the Oslo Accords, the interim agreements between Israel and Palestinian leaders signed in the 1990s, give the Palestinian Authority responsibility for its own health care system.

But rights campaigners have noted that other parts of the Oslo Accords require Israel to work with the Palestinian leadership during an epidemic, while the Fourth Geneva Convention obliges an occupying power to coordinate with the local authorities to maintain public health within an occupied territory, including during epidemics.

Israel controls all imports to the West Bank, most of which is under full Israeli control, and shares control of imports to Gaza with Egypt.