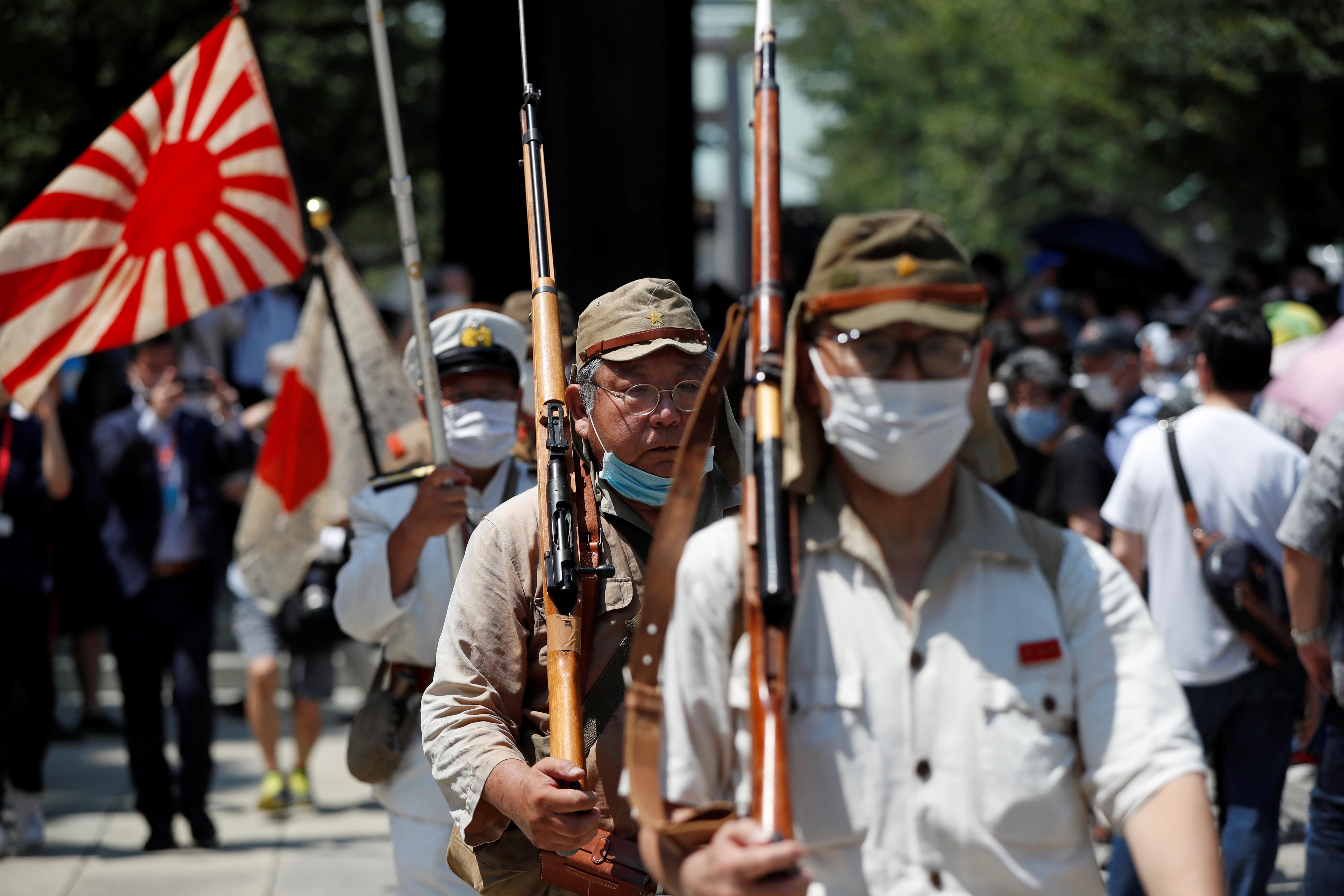 South Korean President Moon Jae-in, whose ties with Japan have been chilled by the legacy of the past, said in a speech Seoul was always ready to discuss history disputes with Tokyo.

At least four Japanese cabinet ministers paid their respects in person at Yasukuni, which honours 14 Japanese wartime leaders convicted as war criminals by an Allied tribunal, as well as Japan’s war dead. The shrine is seen by Beijing and Seoul as a symbol of Japan’s past military aggression.

“I came to deliver a message from (ruling Liberal Democratic Party) President Abe that he paid his respects from the heart to the war dead and prayed for the rest and permanent peace of their souls,” said ruling party lawmaker Shuichi Takatori, who made the offering on Abe’s behalf.

Abe has not gone to Yasukuni in person since a December 2013 visit that outraged China and South Korea, but has sent offerings via an aide.

Thousands of men and women of all ages braved scorching heat amid the novel coronavirus pandemic to pay their respects at Yasukuni, where markers helped people keep social distance while lining up and signs urged them to avoid clustering due to COVID-19 concerns. A group of conservative lawmakers who visit each year sent representatives instead. [L4N2FH01I]

Japan has not seen an explosive surge but cases are rising.

Abe, as well as Emperor Naruhito, will attend a separate official, secular ceremony later in the day that has been scaled down due to concerns over the pandemic.

The United States and Japan have become staunch security allies in the decades since the war’s end but its legacy still haunts East Asia.

Koreans, who mark the date as National Liberation Day, resent Japan’s 1910-1945 colonisation of the peninsula.

China has bitter memories of imperial troops’ invasion and occupation of parts of the country from 1931-1945.

“We must learn from history, let history be a warning for the future, and show that we are prepared to fight in the event of a war”, said a commentary by the official newspaper of China’s military, the People’s Liberation Army.

Japan’s ties with South Korea especially are strained by a dispute over compensation for Koreans forced to work in Japan’s wartime mines and factories.

“We have been discussing with the Japanese government on an amicable solution that the victims can agree on,” Moon said in a speech in Seoul.” The door for negotiation is still widely open.”

Relations are also strained over “comfort women”, as women, many Korean, made to work in Japanese military brothels are euphemistically known.

Consensus over the war remains elusive within Japan, where more than 80% of people were born after the conflict’s end.

“Let’s not talk about the past, let’s look at the future. I hope that Japan and South Korea can come closer together,” said Ayaka Soma, 27, a free-lance researcher visiting Yasukuni.

Naruhito, grandson of wartime Emperor Hirohito and Japan’s first monarch born after the war, last year expressed “deep remorse” over the conflict at the official ceremony for war dead, the first since he inherited the throne after his father, Akihito, abdicated.

Abe, who has adopted a less apologetic stance toward the war, pledged last year “never again to repeat the devastation of war” but did not echo the emperor’s words of remorse.

About 530 people, including relatives of war dead, are expected to take part in the state-sponsored ceremony, down from more than 6,000 last year. 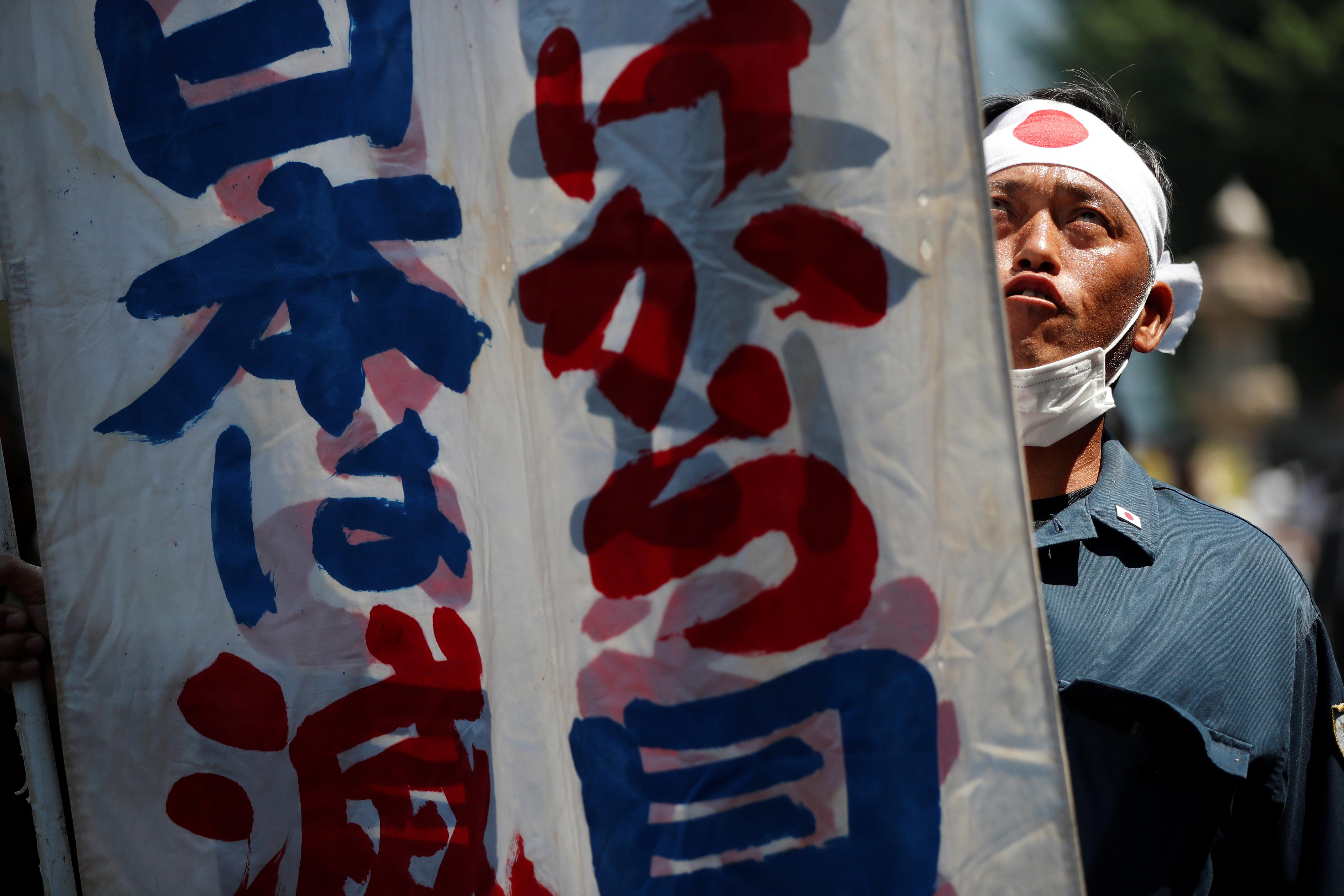 Everyone, including Naruhito and Empress Masako, must wear masks, seats will be at least one metre (yard) apart and a musical performance will replace the singing of the national anthem.

Naruhito’s public appearance on Saturday will be his first since a February news conference marking his birthday, as the pandemic has kept him and Empress Masako at home.