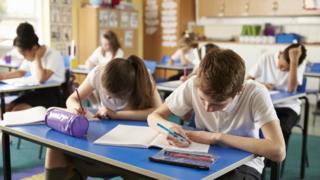 Schools in Jersey will reopen to some year groups from 8 June, the education minister has announced.

Pupils in year six in primary schools and years 10 and 12 in secondary schools will be the first to return.

Schools have been closed to children except those of critical workers and vulnerable children since 20 March.

A “bubble” approach will be used to keep groups of children separated with their teacher, the government said.

Staff and children in secondary schools will be grouped together in “bubbles” and have to keep 2m (6ft) apart from other “bubbles”, and within their group.

There will be “greater flexibility” for those in primary schools.

Anyone with coronavirus symptoms will not be allowed to return.

PPE will be made available to staff and children if any person in the school becomes symptomatic, the government said.

A government survey found that 48% of 2,105 children said they felt worried, and more than 80% said they missed their friends.

Education Minister Senator Tracey Vallois said: “I know how much children have all missed their friends, teachers and schools, which is why we are working hard, following the health advice, to ensure that more children can return to school as soon as is practically possible, while ensuring that public health measures can be maintained.”

She said there would be some “discretion” in the attendance policy to provide “flexibility” for households which contain someone who is shielding.

Private nurseries will also be allowed to open to a set number of children, and child-minders will be permitted to care for small groups.