The Turkish leader met with Vladimir Putin at his Sochi residence on Friday to discuss the ongoing war in Ukraine. Recep Tayyip Erdogan has claimed a leading role in negotiations between Kyiv and Moscow, helping broker a deal on resuming grain exports across the Black Sea. But military expert Igor Korotchenko issued a stern warning to Turkey’s leader not to step on Putin’s toes as he warned Russia holds the keys to Erdogan’s re-election next year.

Speaking on Rossiya-1, Korotchenko said: “Let’s not forget the most important thing – the election of 2023.

“Without support of Russia, without Putin’s support, the keys to Erdogan’s presidency are in the hands of the Russian leader if we’re being honest.”

He continued: “We’re not diminishing the role of the Turkish people in making their choice.

“We’re not diminishing Erdogan’s part in this either, but in the modern world, such a mighty, self-sufficient power as Russia influences elections held by other nations in favor of certain politicians.

JUST IN: ‘Public unrest’ within EU as Germany ‘caught out’ over its reliance on Russian gas 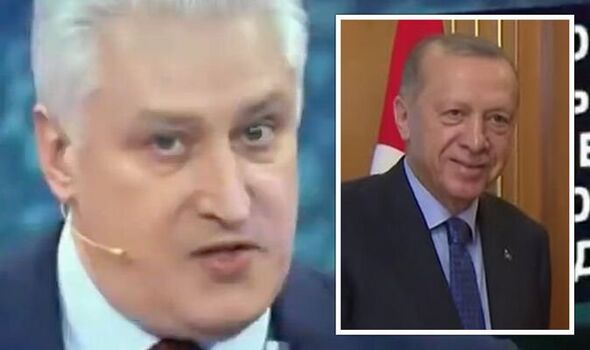 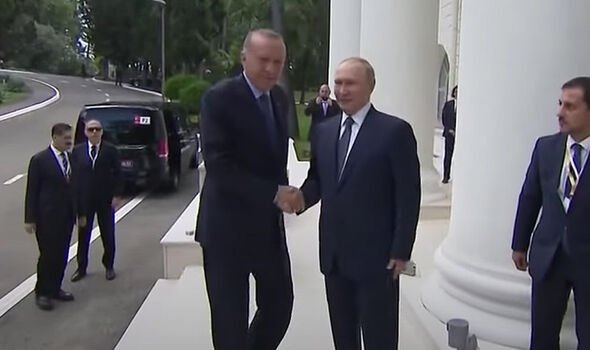 “That’s why the friendship with Russia, and personal contacts between Putin and Erdogan are the advantages that will enable the Turkish voters to vote for Erdogan next year.

“Either way, these were very good talks and we hope for real, practical results.”

Erdogan said meetings between Turkish and Russian delegations had been fruitful and that he would discuss developments in Syria with his Russian counterpart Vladimir Putin during his visit to Russia.

Sitting opposite Putin ahead of their talks in the Black Sea city of Sochi, Erdogan said in comments broadcast on Turkish television it was important that the Akkuyu nuclear plant being built by a Russian company in southern Turkey was completed on time.

But Western governments are increasingly alarmed about deepening economic ties between Turkey and Russia, warning of the mounting risk that Turkey could be hit by punitive retaliation if it helps Russia avoid sanctions.

One official told FT: “For example, they could ask for restrictions on trade finance or ask the large financial companies to reduce finance to Turkish companies.

“I would not rule out any negative actions [if] Turkey gets too close to Russia.”

Erdogan insisted he is pursuing a “balanced” approach to Ukraine and Russia since the start of the invasion in February.

DON’T MISS:
Ukraine LIVE: Putin dismisses SIX commanders over war plan failures [LIVE]
POLL: Should the US back down in Taiwan? [VOTE]
China vs Taiwan MAPPED: Was Taiwan ever part of China? [MAP] 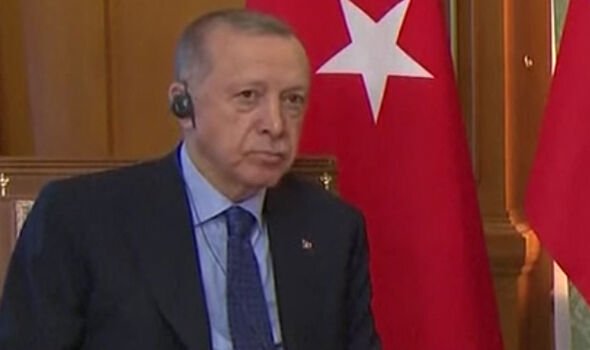 Following their meeting last week, Putin and Erdogan also confirmed their determination to act in cooperation against terror organisations in Syria, according to a joint statement following their bilateral meeting.

During the four-hour meeting at the Black Sea resort of Sochi on Friday, the leaders agreed to take steps to increase trade volumes and meet both parties’ expectations over economic and energy issues, according to the joint statement.

Erdogan has threatened to order new military operations in Syria to extend 30-km (20-mile) deep “safe zones” on the border.

Turkey backs fighters in Syria who have fought against President Bashar al-Assad, who is in turn supported by Russia.

Ankara’s operations in northern Syria have largely targeted a Kurdish militia which it views as a terrorist group.