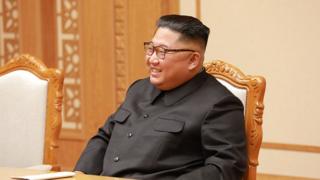 Speaking at a politburo meeting, Mr Kim said the country had “prevented the inroad of the malignant virus and maintained a stable situation”.

North Korea closed its borders and put thousands into isolation six months ago as the virus swept across the globe.

It claims that it has no virus cases, though analysts say this is unlikely.

Mr Kim is said to have “analysed in detail the six month-long national emergency anti-epidemic work” at a politburo meeting on Thursday. He said the success in handling the virus was “achieved by the far-sighted leadership of the Party Central Committee”.

But he stressed the importance of maintaining “maximum alert without… relaxation on the anti-epidemic front”, adding that the virus was still present in neighbouring countries.

“He repeatedly warned that hasty relief of anti-epidemic measures will result in unimaginable and irretrievable crisis,” said the KCNA report on Friday.

In late January, North Korea moved quickly against the virus – sealing off its borders and later quarantining hundreds of foreigners in the capital, Pyongyang.

It also put tens of thousands of its own citizens into isolation and closed schools.

North Korea has now reopened schools, but has kept a ban on public gatherings and made it compulsory for people to wear masks in public places, said a Reuters report on 1 July quoting a World Health Organization official.

The WHO also reported that the country has now tested just 922 people for the virus – all of whom have reportedly tested negative.

North Korea, which shares a long border with China, has long maintained that it has not suffered from a single case of the virus.

However, Oliver Hotham, managing editor of specialist news site NK News, told the BBC earlier this year that this was probably not true.

“It’s very unlikely that it has seen no cases because it borders China and South Korea. [Especially with China], given the amount of cross border trade… I really don’t see how it’s possible they could have prevented it,” he said.

“[But] they really did take precautions early [so] I think its possible they’ve prevented a full on outbreak.”