Indonesia’s Krakatoa volcano has erupted twice, sending huge plumes of smoke, lava and ash into the air. The Center for Volcanology and Geological Disaster Mitigation (PVMBG) reported the first eruption lasted one minute and 12 seconds starting at 9.58pm on Friday night, with the second one at 10.35pm.

Indonesia’s capital Jakarta, which located about 100 miles away, reportedly heard ‘loud thunder-like sounds’ after the eruptions.

Reports say ‘thick ash’ started to drop from the sky after the explosion, which is believed to be the biggest since the partial collapse of the volcano in December 2018.

A “level 2” alert (the second highest out of four) was in place Saturday, though no casualties had yet been reported.

The PVMBG also confirmed three other volcanoes in Indonesia erupted on Friday but they are unrelated. 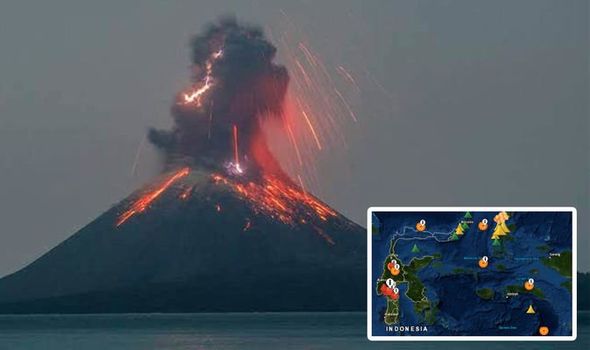 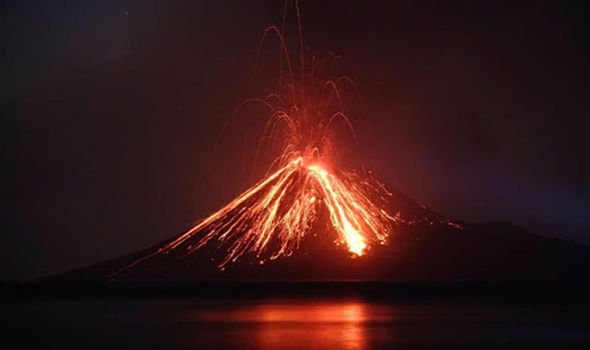 When was Krakatoa’s last eruption?

The last major eruption at Krakatoa was about 18 months ago, when an eruption of the volcano on December 22, 2018 caused a deadly tsunami.

Monster waves up to five meters in height made landfall, destroying hundreds of homes and killing more than 400 people.

Footage shared on social media showed a wave crashing into a tent in the Tanjung Lesung beach resort in the west of Java island, where rock band Seventeen were performing at the time.

Members of the band were seen being swept away as the wave destroyed the stage.

Following its eruption in 2018, the volcano collapsed – losing about two-thirds of its height and three-quarters of its mass. 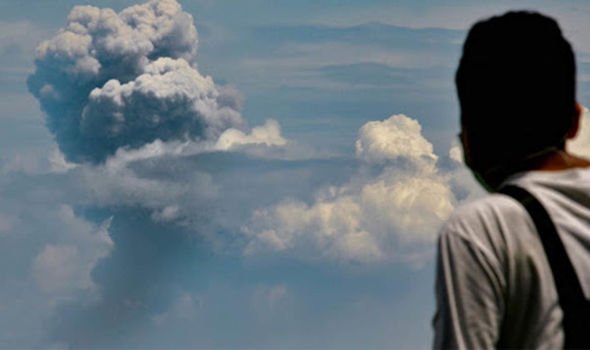 Krakatoa is still erupting, according to the latest data.

Analysis from Volcano Discovery says: “Last night’s violent paroxysm at Anak Krakatau ended abruptly around 08:00 morning local time. Fortunately, the webcam on the island survived the eruption although it seems it was hit by a projectile at 02:33 local time, when it suddenly tilted.”

“The eruption could be a resumption of the pattern of activity during 2018, when the volcano produced violent paroxysms with lava fountains and lava flows at intervals of few weeks. It will be interesting to monitor whether this is the case and how activity will evolve in the coming weeks and months.

“As soon as possible again, we hope to be able to travel and visit the island to document the new activity and probably dramatic changes to the morphology of the island and its crater, where likely a new cone is now forming.” 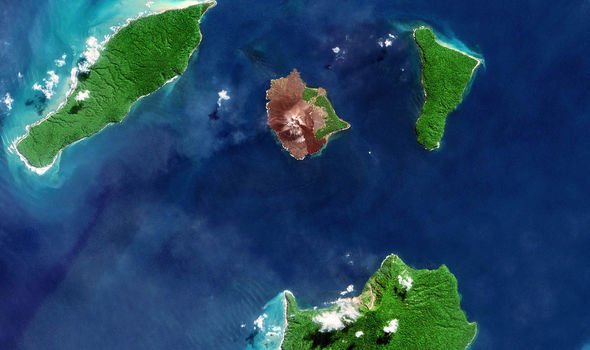 Where is Anak Krakatoa?

Anak Krakatau is a volcanic island located in the Sunda Strait between the islands of Java and Sumatra in the Indonesian province of Lampung.

Anak Krakatau, which translates to “the child of Krakatoa,” was formed after Krakatoa erupted in 1883.

The eruption produced a massive explosion 10,000 times more powerful than the atomic bomb dropped on Hiroshima and killed approximately 36,000 people.

The closest city to Anak Krakatoa is Jakarta, which lies about 100 miles from the volcano.

Indonesia is often stuck by tsunamis because it sits within the Pacific Ring of Fire, which is a 25,000 miles-long chain of volcanoes and warthquake hotbeds.