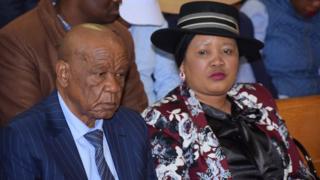 Lesotho’s prime minister, who is accused of murdering his estranged wife, has deployed the army on the streets to “restore order”.

The decision comes a day after the constitutional court ruled against his decision to suspend parliament.

The prime minister has so far resisted pressure to resign over the killing of his then-wife Lipolelo Thabane in 2017.

The case has shocked many in the small landlocked kingdom, which is entirely surrounded by South Africa.

The prime minister was involved in bitter divorce proceedings with his estranged wife Lipolelo when she was shot dead three years ago.

Two months later, Mr Thabane married his current wife Maesaiah, with whom he was living at the time of the murder.

Maesaiah Thabane was charged in connection with the killing in February and has since been released on bail.

Mr Thabane’s own lawyers have argued that as prime minister he should be immune from prosecution and cannot be charged with murder. The case has been referred to the High Court, which will be sitting as the Constitutional Court when it decides whether the case against Mr Thabane can proceed.

The 80-year-old prime minister has previously said he will step down in July, resisting pressure from his own party to leave office immediately.