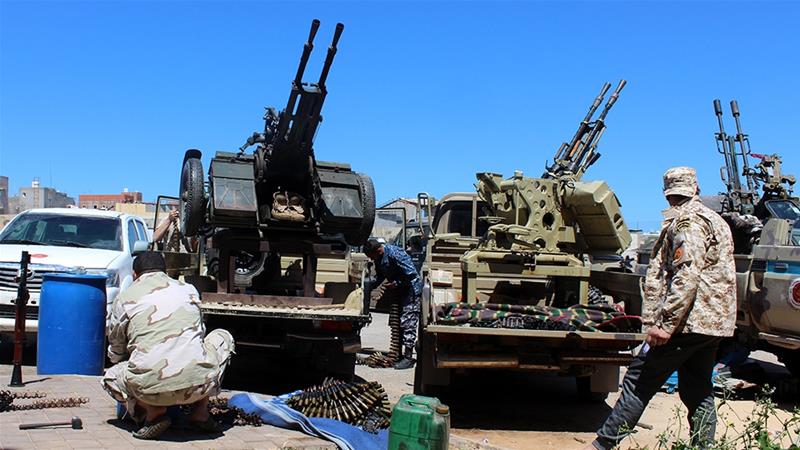 Libya’s internationally recognised government has said it shot down two fighter jets and a helicopter belonging to renegade commander Khalifa Haftar, as two civilians were killed in the capital in rocket attacks.

The Government of National Accord (GNA) said on Sunday it brought down the three aircraft east of the Mediterranean city of Misrata.

At a press briefing on Sunday evening, Colonel Muhammad Qanunu said the GNA’s air defences had intercepted Haftar’s planes in the Abu Grain area and shot down the two Chinese-made Wing Loong aircraft and one Russian Mi-35 helicopter.

Sources told Al Jazeera the clashes killed nine soldiers from the GNA forces and more than 30 fighters loyal to Haftar, including a number of Sudanese and Chadian fighters.

The sources also said the GNA forces used drones to launch raids on Haftar’s forces, the self-styled Libyan National Army (LNA), which has been trying to capture the capital city from the internationally recognised government since last April.

More than 1,000 people have been killed in the violence and tens of thousands displaced due to the fighting that has continued despite the UN Security Council passing a resolution in February demanding the warring parties commit to a “lasting ceasefire”.

In the Sidi Selim area, a woman was killed in a rocket attack on Sunday, according to the Abu Selim Municipality.

A child was killed, and four other civilians wounded, in a rocket attack in the Ain Zara area of the besieged capital, the State of Emergency and Rescue Council under the health ministry of the GNA said in a statement on Sunday.

The LNA has continued its attacks on the capital in spite of measures against the novel coronavirus, which included a ceasefire that came into effect on March 21.

The GNA administration launched Operation Peace Storm on March 26 to counteract the attacks.

Since the overthrow of late ruler Muammar Gaddafi in 2011, two seats of power have emerged in Libya: Haftar in eastern Libya, supported by Egypt, Russia and the United Arab Emirates, and the GNA in Tripoli, which is backed by Turkey.

What’s happening with the war in Libya? | Start Here