Fierce and life-threatening Hurricane Ian is making its way northwards across southern America today (September 26) with President Jo Biden issuing a state of emergency in Florida. The prior tropical storm status was upgraded early this morning. The National Hurricane Center in the US said it was expected that the hurricane will continue building strength throughout today as it continued pushing up from the Carribean. The path will see it progress to Florida’s western coast by mid-week, CBS news channel has said. This has triggered a state of emergency for this weekend from Governor Ron DeSantis – with “two dozen counties” urged to be on guard.

Meteorologists from Accuweather have said that Cuba may also be in the firing line, as hurricane-force winds and a “dangerous” storm surge continues gaining power.

People have been urged to prepare for Hurricane Ian’s battering winds and rising sea levels this week which moves in after an unusually quiet start to the hurricane season.

Power crews are also poised to help with restoring electricity in the event of the storm knocking out vital connections.  The storm formed in the central Caribbean last Friday,  weather experts said, just days after it was categorised as a “disorganised area of showers and thunderstorms” lingering off the east of the Carribean sea.

The National Hurricane Center said: “Ian is expected to be a major hurricane in the eastern Gulf of Mexico during the middle of this week. Regardless of Ian’s track and intensity, there is a risk of a life threatening storm surge hurricane-force winds, and heavy rainfall along the west coast of Florida and the Florida Panhandle by the middle of this week.” 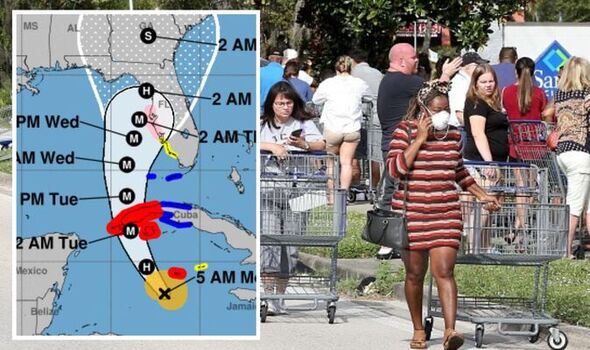 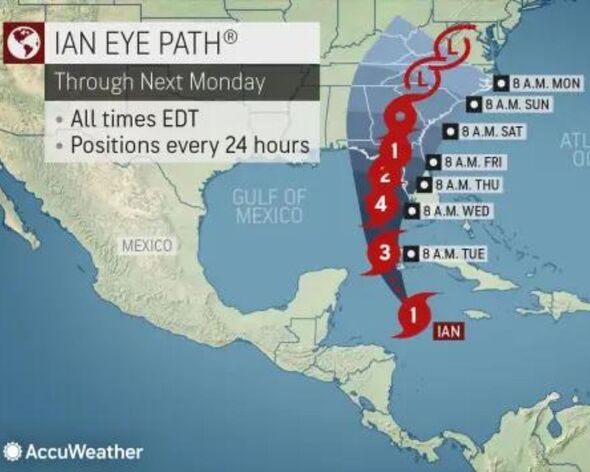 With meteorologists predicting the gusts will get stronger, it’s no surprise that a state of emergency has been declared as Ian is already wracking up winds of up to 75mph, moving northwest at 14mph.

This hurricane has currently been placed in category 1, but forecasters are anticipating that this will be upgraded again later today as thunderstorms develop around it – a supposed green light for the hurricane’s development.

AccuWeather Senior Meteorologist Adam Douty said: “A quick uptick in strengthening is expected early this week as Ian moves into the western Caribbean, where low wind shear and very warm water are in place. This will raise the likelihood of significant impacts in the western Caribbean, and eventually the United States.

“By Tuesday, Ian may be a dangerous major hurricane.” 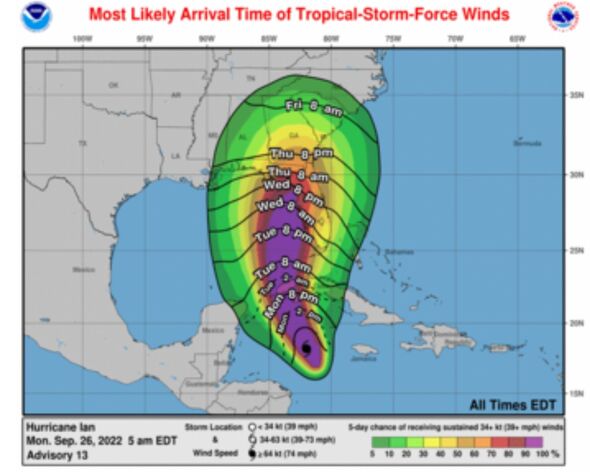 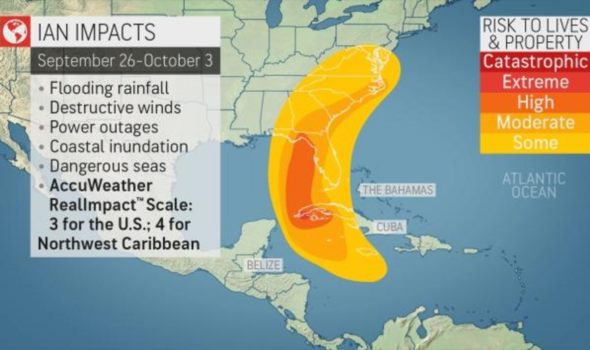 Pauline Vo, a teacher in Florida, took to Twitter to speak about how Hurricane Ian will disrupt the education system and how teachers will be doing their best to protect the learning environment for pupils.

Residents have also been pictured queuing to stock up on food supply at supermarkets – with some shelves emptied as panic buying ensues. CNN has reported the hurricane path is not clear cut forcing mass panic from people living in its potential line of havoc. A hurricane watch has been issued across the west coast from north of Englewood to the Anclote River, including Tampa Bay.

The Hurricane Center added: “Considerable flooding impacts are possible mid-to-late week in central Florida given already saturated antecedent conditions, and flash and urban flooding is possible with rainfall across the Florida Keys and the Florida peninsula through mid-week. Tropical storm conditions are forecast to reach the west-central Florida coast Tuesday night, with hurricane conditions possible on Wednesday.”

President Biden’s state of emergency declaration is now in place and authorises the Department of Homeland Security (DHS) and Federal Emergency Management Agency (FEMA) to coordinate disaster relief efforts and provide assistance if or when Ian makes its impact.

This presidential order reportedly covers 24 counties and unlocks disaster relief help to save lives, protect property, public health and safety and try to lessen the disaster this dangerous weather front may cause.

Despite the hurricane being in category 1 – Americans are expecting it to reach category 4 before the middle of this week.