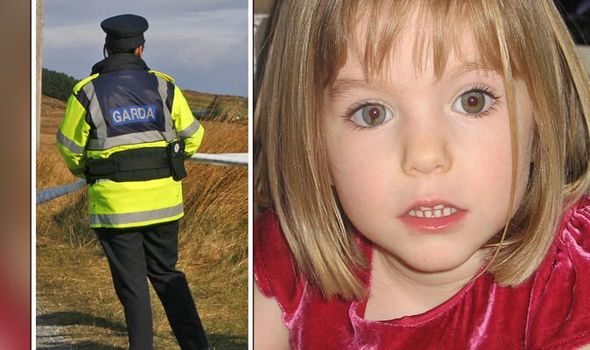 Officers were said to have raided a remote house in County Donegal following a tip-off recently. However, when they entered the property, they found a large picture of the missing child hanging on a wall in the house.

According to the Irish Mirror, the Gardai contacted Interpol over the discovery.

A source told the paper that they had then checked to see where the man in Donegal had been at the time Madeleine went missing in 2003.

Her disappearance in the resort of Praia da Luz in Portugal sparked one of the largest missing persons investigations ever.

However, no trace has ever been found of the child.

The Gardai source said that there was no way the man could have been in Portugal at the time of the disappearance.

The source said: “It was a full-scale operation as we were fearful the man would destroy any potential evidence we were trying to gather before we arrested him.

“However, nobody was prepared for the picture of Maddie McCann in the house.

“It was very unusual to say the least considering the circumstances.

“We had to make all the relevant checks but are satisfied that this man had nothing to do with that particular case.”

The Irish Mirror said that a genuine reason for the picture of the missing child being in the house had been given by another person.

The police did remove a number of items from the house following the raid, including a laptop, it said.

A man had since appeared in court.