Rights groups say sentencing 27 refugees to caning for arriving in Malaysia without a permit is tantamount to torture. 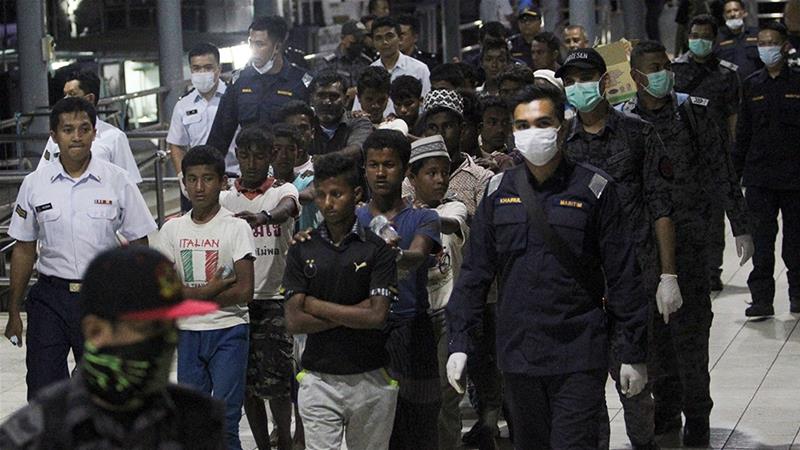 A Malaysian court will hear a bid to set aside caning sentences handed down to 27 Rohingya refugees from Myanmar, lawyers said, a punishment that rights groups have decried as vicious and tantamount to torture.

Muslim-majority Malaysia has long been a common destination for Rohingya seeking a better life after escaping a 2017 military crackdown in Myanmar and, more recently, refugee camps in Bangladesh.

But Malaysia, which does not recognise refugee status, has recently turned away boats and detained hundreds of Rohingya, saying it can not take in more migrants because of the struggle its economy is facing as a result of the coronavirus pandemic.

In June, a court on Malaysia’s Langkawi island sentenced 40 Rohingya refugees to seven months in jail for arriving in the country by boat without a valid permit, Collin Andrew, a lawyer representing the refugees, told Reuters news agency on Tuesday.

Twenty-seven men among them were also sentenced to caning, a penalty that Andrew will be seeking to overturn in court on Wednesday.

The immigration department and the attorney general’s office did not immediately respond to a request for comment.

Under Malaysia’s Immigration Act, anyone who enters the country without permission can face a 10,000-ringgit ($2,345) fine, jail for up to five years, and six strokes of a cane.

Courts can choose not to hand down the caning sentence on humanitarian grounds if the migrant charged is a refugee and does not have any prior criminal history, Andrew said.

“So it’s quite unusual for the court to impose caning against Rohingya in this case,” he said.

On Monday, rights group Amnesty International urged Malaysia not to cane the refugees, saying it was “cruel and inhumane”.

“The men who face violent lashings on top of jail terms have already fled persecution and crimes against humanity in Myanmar,” Rachel Chhoa-Howard, Malaysia researcher at Amnesty, said in a statement.

“They also survived a dangerous journey at sea to Malaysia in search of safety. The inhumanity of this approach is atrocious.”

Lawyers have also sought a review of a case against six Rohingya teenagers, including two girls, who Andrew said had been wrongly tried and convicted as adults.

This month, the court had dismissed a case against 51 Rohingya minors who were also charged for violating immigration laws, he said.

Amnesty has called on the government to release all other Rohingya refugees who had been convicted under the alleged immigration offences, saying they are contrary to international law.

According to the rights group, since the start of 2020, up to 1,400 Rohingya people have been stranded in boats in the Andaman Sea and the Bay of Bengal after fleeing persecution in Myanmar and refugee camps in Bangladesh.