Home » World News » Man dies after WWII artillery shell explosion: Call for US to clean up its ‘mess’ in Pacific

The death of a man in the Solomon Islands has prompted a call for the US and others to clean up some of the dangerous weapons they left behind during the Second World War.

Raziv Hilly, 29, was the third person killed on the islands recently as a result of munitions from the conflict, following the deaths of two Australian bomb disposal experts last year.

Three others were injured – two of them are in critical condition, while the third had minor injuries. 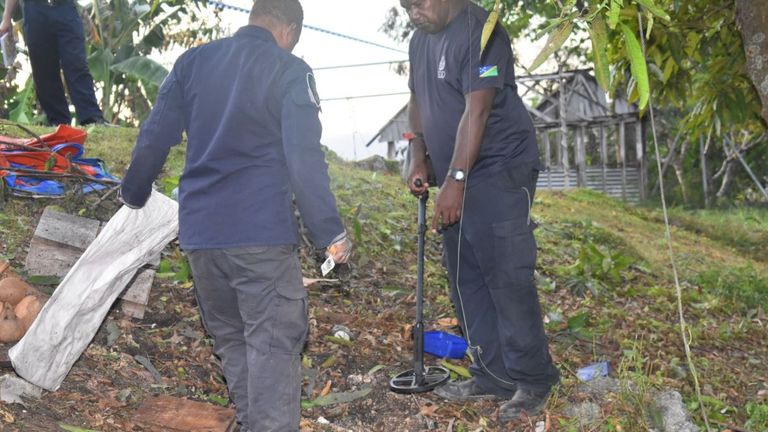 Inspector Clifford Tunuki, from Royal Solomon Islands Police Force, said on Facebook that the explosion happened during a fundraising event in the capital Honiara on Sunday.

A group of young people had chosen a site to start a fire so they could cook food as part of their fundraising efforts.

But they had not realised there was a wartime US 105mm High Explosive Projectile sitting under the ground, Insp Tunuki said.

Mr Hilly’s cousin Claude Posala told the Australian Broadcasting Corp that the US has a “moral obligation” to remove the weapons.

“US, this is your mess,” he said, adding that the Solomon Islands government does not have the capacity.

All sorts of weapons and explosives were brought to various islands in the Pacific during the conflict between the US, its allies, and the Japanese almost 80 years ago.

After Japan withdrew from Guadalcanal in 1943, much of it was left behind, some of it even tossed into the ocean as troops hurried to get home.

Now many people in the Solomon Islands live on land “scattered” with bombs, according to Australian organisation SafeGround.

The Solomon Islands is among the worst-affected in the Pacific, but the danger is also present in Papua New Guinea, Palau, the Marshall Islands, Micronesia, Tuvalu, Nauru, Kiribati and Vanuatu.

The threat means much of the land is useless for farming or infrastructure, it limits tourism and the fishing industry, and – of course – poses an extreme risk to people’s safety. SafeGround’s John Rodsted told The Sydney Morning Herald last year: “World War Two ended, everyone went home and everyone forgot about it and the locals just got stuck with these stockpiles.”

The US has made efforts, along with Australia, New Zealand, and Norwegian People’s Aid, to clear unexploded bombs in the Pacific, but the problem is immense.

Erin McKee, US Ambassador to Papua New Guinea, Solomon Islands, and Vanuatu, said in a statement posted on Facebook: “We were deeply saddened to hear of the tragic incident in Honiara this past weekend and mourn the loss of life.

“The United States government, through our Department of Defense, will continue to support efforts to remove unexploded ordnance from Solomon Islands.

“Among these efforts is our ongoing partnership with Norwegian People’s Aid, which has worked in Solomon Islands since 2019 to identify and dispose of unexploded ordnance.”