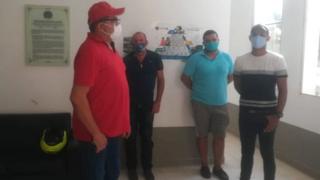 The mayor of a town in Colombia has been praised after he turned his own son in to the police for breaking a curfew imposed to curb the spread of the coronavirus.

Carlos Higgins Villanueva said he had to set an example.

“My family are the first who have to respect the rules,” he tweeted.

There have been more than 95,000 confirmed cases of the virus in Colombia and more than 3,300 people have died.

Atlántico, the northern state where Mr Higgins is mayor of the small town of Juan de Acosta, has the second highest number of infections.

Mayor Higgins posted pictures of himself driving his son, his nephew and a man he described as “a great friend” to the police station, where he asked officers “to deal with the rule-breakers as they see fit”.

The three had been caught on video celebrating Father’s Day. The party they attended was not only held during the hours of a strict curfew but there was also alcohol on sale, in contravention of a temporary state-wide ban imposed for that weekend.

Mayor Higgins wrote on Twitter: “My relatives are the first who have to respect these measures. I will not allow them to put the lives of our villagers at risk just because they wanted to have some drinks.”