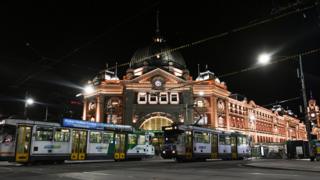 Melbourne is shutting down shops, factories and other non-essential businesses as authorities fight a second wave of coronavirus.

Other measures include a night-time curfew for the city’s five million residents, after an earlier lockdown failed to contain the virus.

About one million workers will soon be staying at home in the Australian city.

A payment for people instructed to isolate for 14 days who have run out of sick leave will also be introduced.

The A$1,500 ($1,070; £815) is mainly aimed at those who cannot access other benefits, and can be applied for more than once, Australian Prime Minister Scott Morrison said.

Authorities hope the new restrictions will reduce transmission of the coronavirus.

Until recently, Australia had had more success than many other countries in tackling Covid-19, but an outbreak in Victoria’s state capital has pushed the nation to its worst point yet.

More than half of the nation’s total 18,300 cases have been recorded in just the last month in Victoria. There have been 215 deaths.

How are Melbourne residents feeling?

Melburnians endured their first night of curfew – which will run from 20:00 to 05:00 for six weeks – on Sunday.

The only valid reasons for leaving home during these hours are work, medical care or care-giving.

Many people say they have accepted the necessity of the restrictions but expressed anger and despair over the new measures.

“I’m sure there are a lot of people that are depressed including myself and my husband,” Jane Baxter-Swale told the BBC.

“We don’t know when these measures are going to finish. There’s no finality to this virus which is awful.”

Under “Stage Four” lockdown, Melbourne residents will also only be allowed to shop and exercise within 5km (three miles) of their home. Exercise outside of the home will only be allowed for one hour at a time.

Only one person per household will be allowed to go grocery shopping, and this can only happen once a day.

Why the new workforce restrictions?

In Melbourne, there are currently about 750,000 workers who are working from home or have been furloughed.

Forcing businesses such as construction sites and factories to reduce their workforces from Thursday – for the first time in the pandemic – means another 250,000 people will not be travelling for work.

“That is when you are dramatically changing the number of people moving around the community, and therefore the number of points at which the virus can be transmitted,” said Victorian Premier Daniel Andrews.

Remote education is also set to resume from Wednesday, taking about one million students and teachers out of the city’s public transport system.

While the widespread restrictions have alarmed many, Mr Andrews stressed that essential services like supermarkets, petrol stations and banks would remain open and urged people not to panic buy.