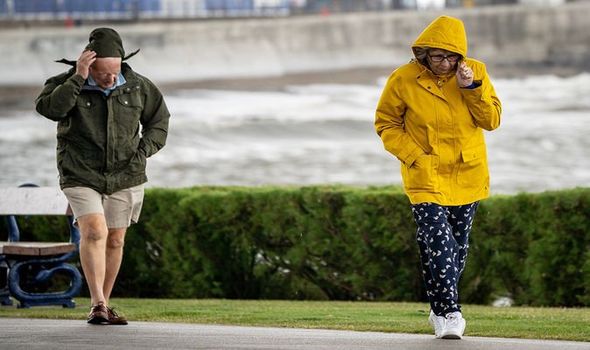 And the country was braced for more havoc today following the 36-hour battering a camper described as “worse than The Wizard Of Oz”.

The Met Office has warned of heavy rain, gales and thunder as Evert sweeps east.

It first hit the Isles of Scilly on Thursday night, lashing them with 69mph winds. Campers were evacuated as yacht crews were rescued.

A history teacher from Tewkesbury, Gloucs, who shared footage of her windbuffeted tent in Cornwall, recalled the storm from the film The Wizard Of Oz.

“At one point we had over 50 knots of wind with squally showers.”

Five people were airlifted to safety after the yacht they were on was in danger of being smashed on to rocks.

Tom Matthews, a campsite owner on Scilly’s Bryher island, had to move some of his guests into a community hall.

He said: “It’s the worst storm we’ve ever had. The strength of the wind and the gusts last night was just something else.”

Devon, a landslip caused by torrential rain blocked the A381 Totnes bypass and other roads were littered with tree branches and other debris.

Lifeboat crews off Studland, Dorset, saved a paddleboarder in his late 20s who was blown more than two miles out to sea.

Met Office yellow wind warnings were sent out for the South East coast, East Anglia and Nottingham, Norwich and Hull.

A spokesman said: “There’ll be further heavy downpours around on Saturday. The heaviest will be across central, eastern and southern England.”

And forecaster Steven Keates said: “The wind will get worse before it gets better.”