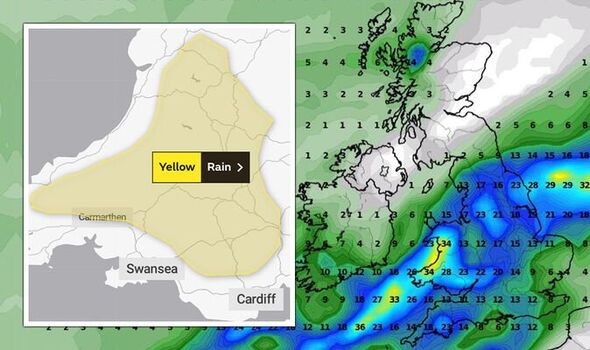 In a yellow weather warning for rain, the Met Office said much of Wales will be struck by up to 100mm of rain in one day. The warning is in effect from midnight on Sunday to 6pm.

The Met Office said heavy rains at the end of the weekend will lead “to some disruption”.

Residents have been warned “flooding of a few homes and businesses is likely”, along with “spray and flooding on roads probably making journey times longer” and “bus and train services probably affected with journey times taking longer”.

In their full statement, they said: “Heavy rain is expected across Wales on Sunday.

“This follows a wet Saturday for many with widely 40-60 mm of rain during the weekend and some spots perhaps seeing 100 mm or more.”

The Met Office also said in their outlook from Saturday to Tuesday: “Rain turning heavier for a time across parts of southern Scotland, northwest England and Wales.

“Unsettled; mild with wind and rain on Sunday, although probably more showery for northern Scotland.

“Colder with sunny spells and showers on Monday, further rain arriving Tuesday after a frost.

Tony Zartman, AccuWeather meteorologist, told Express.co.uk there are warning signs for a “strengthening storm” on Sunday.

He said: “We will have to watch a strengthening storm moving off the Atlantic Ocean and across southern England later Sunday and Sunday night.

“While it will bring a rainy period to Wales and southern England it will also bring the potential for damaging wind gusts of 50-60 mph (80-100 k/hr) across extreme southern England (south of London).

“It’s not out of the question that some coastal area along the English Channel, either coastal England or northern France could reach a maximum wind gust of 80 mph (130 k/hr), depending on the eventual strength and location of the storm.

“Some drying will take place for Monday before more rain moves back in on Tuesday, especially northern and western areas.”