Weather maps show heavy rain is on its way after a damp start to October, with the first half of the month having already seen 87 percent of its average monthly rainfall. Now more torrential downpours are headed for the UK shores, with a band of rain sweeping on Monday morning.

Heavy rain may cause travel disruption and some flooding to parts of Scotland and Northern Ireland this week, according to the Met Office.

Issuing a yellow weather warning for rain, the forecaster said there is a small chance that homes and businesses could be flooded, causing damage to some buildings.

The alert is ineffective from 3am on Monday morning and runs until 9am on Tuesday.

The Met Office said: “Spells of rain, heavy at times, commencing Sunday night will persist through most of Monday before clearing on Tuesday morning.

“Typically 50 to 75mm rain is expected over hills and mountains. Over a few mountains, most likely in Argyll, as much as 75 to 100mm rain may fall.” 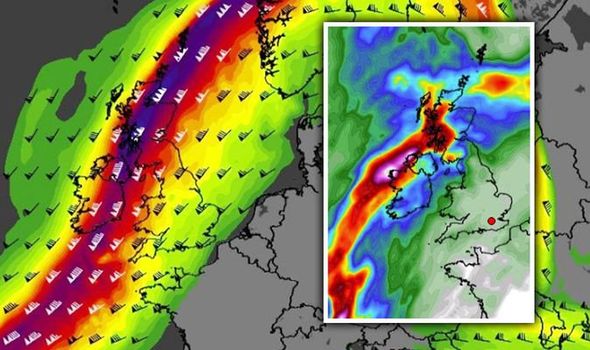 The warnigns are in place for County Armagh, County Down, County Fermanagh, County Londonderry and County Tyrone in Northern Ireland.

In Scotland, the warnings are in place for parts of Central, Tayside & Fife, Highlands & Eilean Siar, SW Scotland, Lothian Borders and Strathclyde.

The warning comes after The Weather Company said Britain could be blasted by 60mph gales for 15 days.

Leon Brown, head of meteorological operations at Weather Channel, said: “Around 15 days with wind gusts over 60mph somewhere in the UK are forecast by the end of winter.

“Stormy periods with floods and transport impacts are expected.” 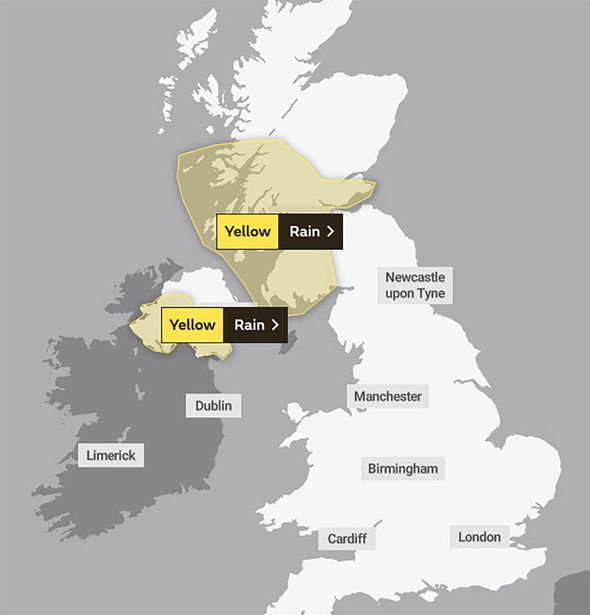 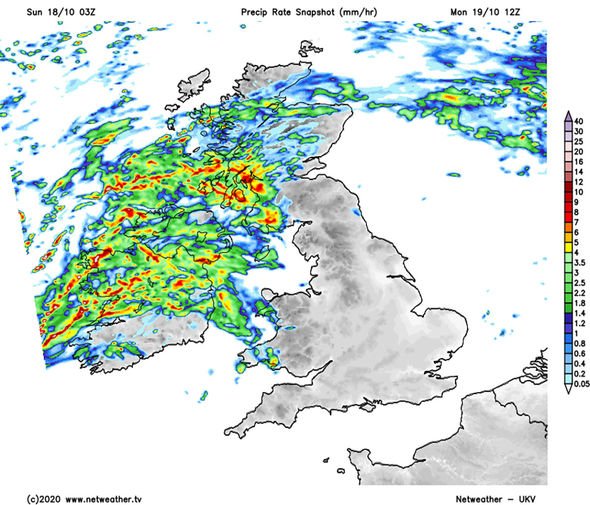 While the Met Office hinted Britain could be facing stormier conditions than is usual at this time of the year.

The autumn forecast read: “September-November has a greater likelihood of windy or stormy weather than usual.”

Met Office forecaster Marco Petagna added: “Yuck – a big change is ahead with the next week not looking nice at all.

“There will be stronger winds and heavy rain, with potential for deep low pressure in midweek and hints of further vigorous systems.” 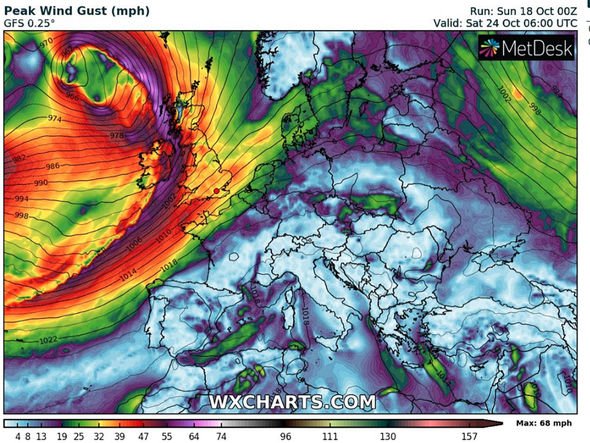 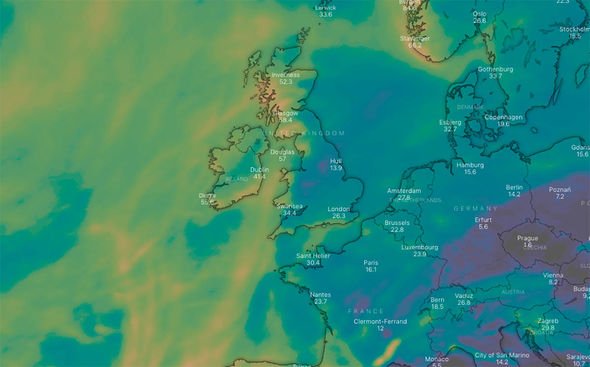 Looking to this week’s forecast, the Met Office says of Mondays forecast: “Mostly cloudy with spells of rain in the north and west, rain heavy at times in Northern Ireland and western Scotland.

“Dry and brighter in the south and east. Windy.”

And the outlook for Tuesday to Thursday adds: “Unsettled with spells of rain for all through Tuesday and Wednesday.

“Windy, too, with gales likely. Settling down from the north on Thursday, though with an increased risk of frost.”

The Netweather forecast adds: “The North also turns wet, after probably a bright but chilly start.

“Over Wales, Northern Ireland and in the West there’ll be showers, that’ll probably become widespread and heavier as the day wears on.

“There’ll be a freshening southerly wind, with top temperatures 11 to 15C but only 8C in the far North.

“As a quite deep depression approaches Ireland from the South West after dark, all parts of Britain become subject to showers.

“There’ll be some heavy bursts of rain in the West, with a more organised band of rain some of it heavy moving up from the South West into parts of England and Wales during the night.

“A South-East or southerly wind continues to freshen, becoming strong over Northern Ireland and in the West where gales are likely later.

“But it’ll be a mild night, with temperatures generally falling no lower than 8 to 12C.”