Elisabetta Gregoraci, ex-wife to Michael Schumacher’s former boss Flavio Briatore, said the driving ace does “not speak” and only “communicates with his eyes”. Her revelation lays bare the painful situation after the German F1 legend sustained catastrophic brain injuries in a skiing accident in 2013.

Schumacher’s family and close friends have always insisted the racing superstar’s condition is not a public matter.

But appearing on the Italian version of reality TV show, Ms Gregoraci told another housemate of Schumacher: “He does not speak. He communicates with his eyes.

According to Spanish newspaper Marca, she added: “Only three people can go see him.” 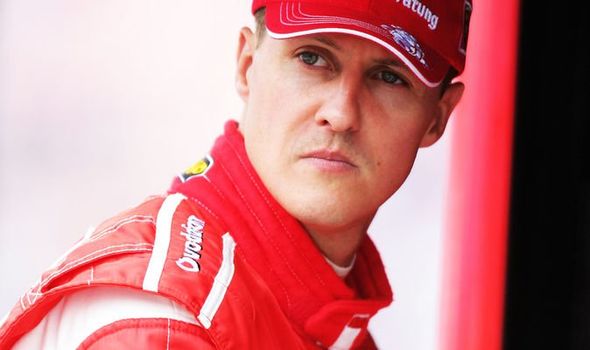 Ms Gregoraci also claimed Schumacher has been moved to Spain from Switzerland with his family.

She added: “They moved to Spain and his wife made a hospital in the house.”

The racing legend has reportedly been left paralysed following the tragic ski accident but those claims are unconfirmed.

However, his recovery and current condition is largely kept private with official updates few and far between.

The German driver, 51, was placed in a medically induced coma for nearly six months but then in June 2014 was discharged from hospital to receive medical care at home near Lake Geneva in Switzerland.

The professor told a documentary for French TV channel TMC about Schumacher’s unknown condition: “I think he’s in a vegetative state, which means he’s awake but not responding.

“He is breathing, his heart is beating, he can probably sit up and take baby steps with help, but no more.

“I think that’s the maximum for him. Is there any chance of seeing him like he was before his accident? I really don’t think so.”

It has also been reported Schumacher underwent pioneering stem cell therapy at the Georges-Pompidou hospital in Paris last September.

At the time he was thought to be in the care of Professor Philippe Menasche, a cardiac surgeon specialising in stem cell research.

Schumacher’s career saw him amass a record seven world titles and the most amount of wins (91) ever for a driver.