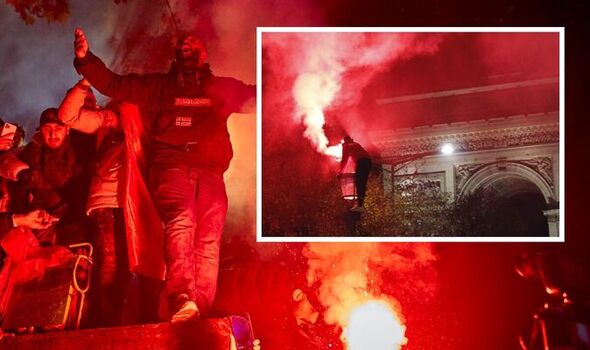 Morocco fans have clashed with riot police in Paris after the African nation advanced to the semi-final of the FIFA World Cup in Qatar with a 1-0 win against Portugal.

Police officers, who can be seen carrying shields, were dealing with the crowds, as flames soared into the skies of the French capital from a motorcycle.

Fireworks and projectiles were fired at officers in footage uploaded to Twitter by journalist Clément Lanot.

Fans descended on the landmark avenue after the final whistle was blown in Morocco’s clash against Portugal.

They were seen chanting, waving flags and honking their horns.

French fans joined the crowds after Olivier Giroud headed Les Bleus to a 2-1 victory against England.

According to Reuters, people were seen smashing shop ventures and fighting with police.