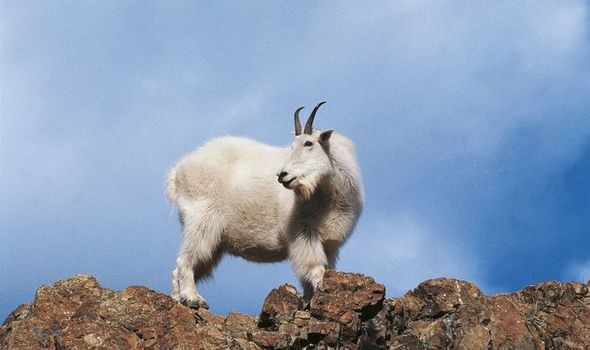 “When grizzly bears attack, they tend to focus on the head, the back of the neck and the shoulders of the prey,” David Laskin, a Parks Canada wildlife ecologist with the Lake Louise, Yoho and Kootenay field unit, told the Guardian.

“This attack usually comes from above.”

“The defensive response of a mountain goat would be to protect itself using its sharp horns.”

The female grizzly bear weighed 154lb (70kg) and Parks Canada believes it did not have any cubs.

A hiker, close to the Burgess Pass trail near Field, British Columbia, came across the bear’s body on September 4 and alerted authorities.

The body was then airlifted out later that day due to concerns it may attract other predators.

The Burgess Pass is an eight mile trail primarily used for hiking and running.

Mountain goats can weigh as much as 275lbs (125kg) and normally stick to high altitude outcroppings.

However, on occasion the creatures venture to different areas where they may come across grizzly bears.

“But this is the first case my colleague and I have ever seen.

“Bears put themselves at risk when predating on large ungulates like moose, and elk …

“And there’s been other cases of mountain goats defensively killing bears that have been reported in the past, but rarely do you find anything documented like this.

“This has definitely been interesting – and a reminder that nature is full of surprises.”