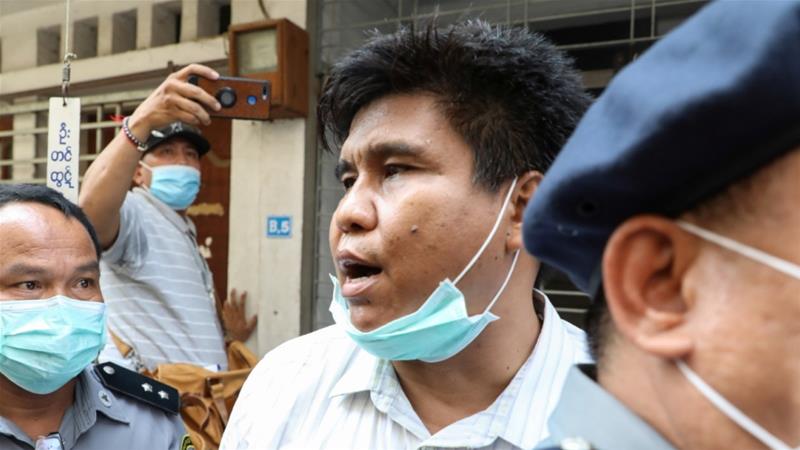 A Myanmar court has charged a journalist who published an interview with the Arakan Army rebel group under a terrorism law, while his website and others reporting on the conflict in the troubled western Rakhine state were blocked, Reuters News Agency reported on Wednesday.

The court in the second-largest city, Mandalay, charged Nay Myo Lin, the editor-in-chief of Voice of Myanmar, under sections of the Terrorism Act on Tuesday after he conducted a March 27 interview with the Arakan Army in which it responded to Myanmar’s decision to label it as a terrorist group.

Nay Myo Lin’s lawyer, Thein Than Oo, confirmed the charges, which can carry a life sentence, but told Reuters he did not have any more details.

The journalist’s wife, Zarni Mann, also confirmed to Reuters that her husband had been charged.

After the hearing on Tuesday, Nay Myo Lin was quoted by Radio Free Asia as saying: “If the members of the Myanmar Press Council (MPC) review the report and find any violations of media ethics, they can give me any kind of punishment they like.”

The MPC is the body that investigates and settles press disputes in Myanmar.

Myanmar last week declared the Arakan Army a terrorist group after more than a year of intense fighting against the organisation, which recruits from the mostly Buddhist ethnic Rakhine majority and seeks greater autonomy for the region.

An Arakan Army spokesman did not immediately respond to a request for comment.

Myra Dahgaypaw, managing director of the United States Campaign for Burma (USCB), denounced the arrest writing on social media: “Journalism is not a crime. It does not commit human rights abuses and atrocities like the Burma Army.”

Reporters Without Borders also called for the “immediate withdrawal of the utterly disproportionate charges” against Nay Myo Lin.

It said the journalist published his interview “with the aim of serving the public interest and restarting the talks needed to end the conflict” between the government and the armed group.

Reuters was unable to contact the court to confirm the charges or the reason they were brought. A government spokesman did not answer phone calls requesting comment.

Myanmar’s communications ministry also said it had ordered mobile operators to block dozens of websites over “fake news”. It did not publish a list of the blocked sites but several prominent outlets covering the conflict in Rakhine were inaccessible on Tuesday.

Myo Swe, an official from the Ministry of Transport and Communications, told Reuters that websites had been blocked “because we received orders”, declining to elaborate.

“These websites are publishing fake news and news that can cause instability in the country,” he said. Websites carrying pornography were also included in the ban, he said.

Norway’s Telenor, one of four mobile operators in Myanmar, said in a statement that it had been ordered to block 221 websites and would comply, but added: “We do not, and should not, select or alter the content of communications in our channel.”

Myanmar’s army has filed several cases in recent years against reporters and news organizations covering the conflict in Rakhine, where about 730,000 Muslim-majority Rohingya fled a military crackdown in 2017.

Myanmar’s army filed a criminal complaint against Reuters in early March over a story about the conflict in Rakhine.

It later said it would withdraw the complaint at the request of the MPC and in the interest of good relations with the media.