Nazanin Zaghari-Ratcliffe has had her leave from an Iranian prison extended by two weeks – and she is being considered for clemency.

Richard Ratcliffe said his wife’s father had been told her temporary release from Evin prison in Tehran will now run until 18 April.

The British-Iranian is in relative isolation at her parents’ house in Tehran while the country fights the COVID-19 pandemic. 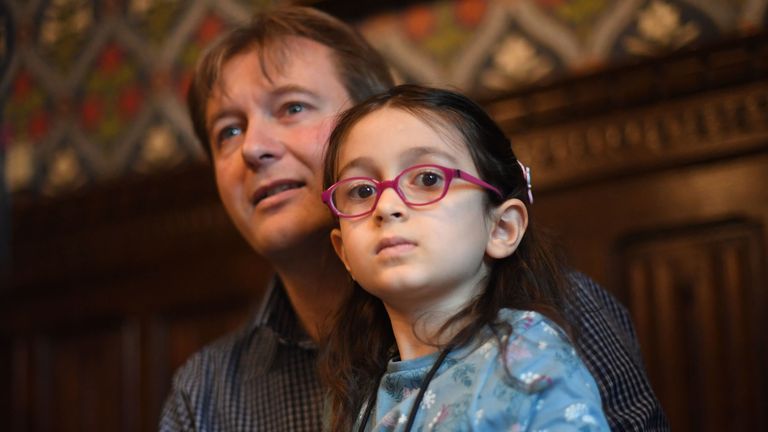 Her father was also notified that her file had been put forward to the Iranian prosecutor general for consideration for clemency.

Former foreign secretary Jeremy Hunt welcomed the news on Twitter – calling it a “glimmer of hope amidst the darkness”, adding: “Let’s pray that this remarkable family are reunited soon”.

The family’s MP Tulip Siddiq tweeted: “Every extra day Nazanin is out of jail is better than the alternative – but we must not lose focus on getting her home and away from the danger of coronavirus in Iran as soon as possible.”

On a Facebook page used by the family to campaign for Mrs Zaghari-Ratcliffe’s release, a comment was posted saying the news was “a step in the right direction – let’s hope it’s the first step home”.

Mrs Zaghari-Ratcliffe was arrested at Tehran’s Imam Khomeini International Airport while travelling to introduce Gabriella to her Iranian relatives in 2016.

She was sentenced to five years in jail over claims of plotting to overthrow Iran’s government, which she denies.

Mrs Zaghari-Ratcliffe was later given diplomatic protection by the British government, which argues that Iran has failed to meet its obligations under international law.

Earlier this month it was revealed that Iran had temporarily freed about 85,000 prisoners in an effort to combat the spread of coronavirus.

The number of dead from coronavirus has reached 2,517 in Iran and more than 35,000 people have been infected.