EU: Netherlands to play 'critical role' for US says expert

The Netherlands has been hit by rioting and mass arrests as citizens protest against the lockdown and the country’s slow vaccine rollout. The frontrunner in the upcoming election, Prime Minister Mark Rutte, said the nation was in “an incredibly difficult phase” of the pandemic as infections continue to surge. But there are concerns the negative reaction to the country’s handling of the outbreak could be reflected in the ballot box.

When is the election?

The Netherlands will head to the polls on Wednesday, March 17.

This general election will serve to elect the members of the House of Representatives after Mr Rutte’s entire government resigned in January over a childcare tax scandal.

The crisis saw more than 20,000 families pursued for fraud before the courts, despite many of the cases amounting simply to a form being incorrectly filled out, or a missing signature.

A report into the scandal concluded that “fundamental principles of the rule of law were violated” by the Dutch tax authority. 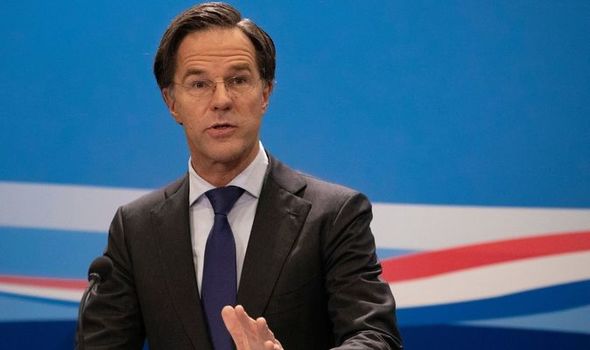 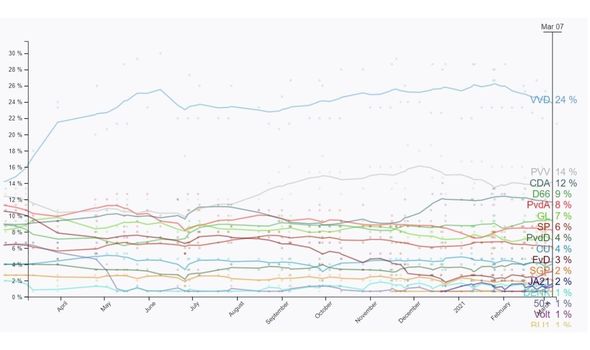 What do the latest polls show?

Politico’s Poll of Polls serves to provide a cross-section made up of all available polls on the matter.

The latest data shows that, despite Mr Rutte’s People’s Party for Freedom and Democracy (VVD) stepping down over the childcare scandal, he is still on track to be reinstated as prime minister.

The current poll shows the VVD is on track to win 24 percent of the vote. 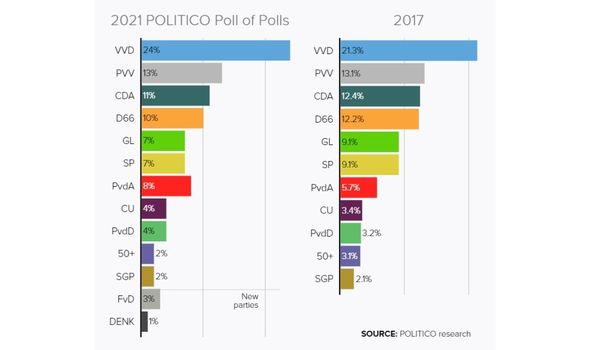 If this manifests, it will leave the country’s largest party with more seats than the previous election.

This would make it fairly certain the VVD will form the next government, most likely with some of the same coalition partners.

Coming up behind the VVD is the Party for Freedom (PVV), led by Geert Wilders, looking to rake in 14 percent.

The anti-Islam populist PVV s forecasting to hold about the same number of seats as the last election.

Mr Rutte has already ruled out a coalition with the PVV, regardless of how many seats they win.

Democrats 66 (D66) are in next with nine percent, followed by the Labour Party (PvdA) with eight percent and the Green Left (GL) with seven percent.

The Dutch election system works with proportional representation in a single, nationwide constituency, meaning that any party that wins 0.67 percent of the national vote is assured of a seat. 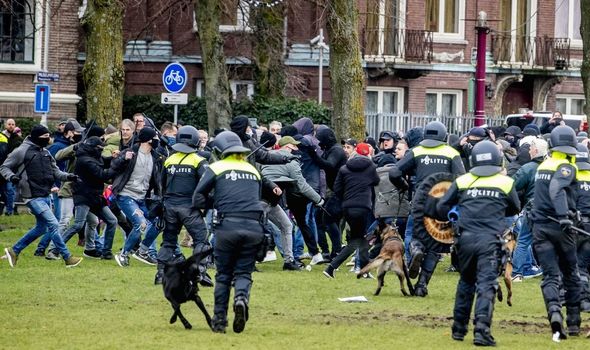 The current parliament is made up of 14 parties, and a record 37 are contesting in this election as the fragmented parliament saw support for dominant parties dropping and opening space for smaller parties to win seats.

Analysts predict Mr Rutte should be able to form a new coalition with just two of his three current partners: the CDA and the progressive D66.

Predictions are that he won’t need the socially conservative Christian Union whose support he needed for a majority in 2017.

Another scenario being discussed would be if Mr Rutte tried to form a new alliance with the CDA and the PvdA.

The PvdA after a disastrous showing in the last elections in which it lost three-quarters of its seats, is recovering somewhat in the polls.