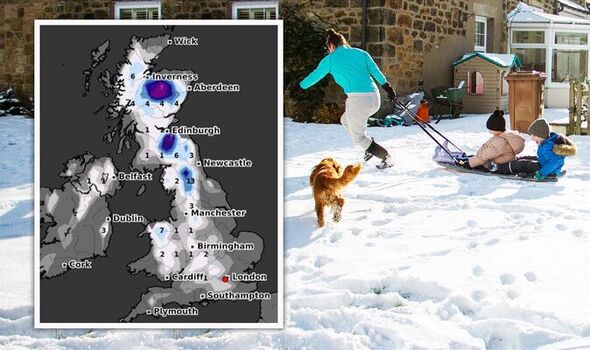 Meteorologists have weighed in after the emergence of charts showing a major freeze with the potential of up to four inches of snow set to hit the UK in December. It comes amid news that high winds from Poland and Russia could lead to wintry downpours as Britons move into the festive period.

Despite it being early days, experts have acknowledged the potential for Britain to temporarily slink back into the heavy snow showers of the 2010 winter.

Jim Dale, meteorologist for British Weather Services, said: “The origins from the particular regime is continental. In essence, I’m going to say Russia and Siberia.

“High pressure basically over Scandinavia and northern Russia. So we get a Beast from the East.

“It’s from the east which is always a very cold direction. We get into December and in no man’s land.

“High pressure growing over eastern Europe through the end of November will drive the cold blast as it nudges closer to the UK.

“Right now it is classical season temperature changes, mist and fog, then we get the easterlies, the breeze.

“You won’t notice the breeze much from Wednesday onwards, it won’t be crazy, just a bit chilly.”

He said that temperatures will lower from December 8 and 9.

The meteorologist said: “It starts to pick up more and by now we have got some snow over the higher ground in Scotland.”

Mr Dale said the “transference of temperature” will come “in a straight line” from the east and will get as low as -1 in mid-December with the potential for 4 inches of snow along the way.

He said: “The snow showers will be sporadic, waiting for the bigger stuff from Europe, which is very sub-zero.

“The freeze from those Eastern parts is transporting itself into ourselves, and that will probably mean as we move towards Christmas (I won’t say Christmas itself) but around the 12th and 15th, that’s when we can start to talk about potential snow events.”

He added the Atlantic will be completely blocked off by cold air.

The expert went on to liken the chart to November 2010, but added the specifics were not yet available to finally confirm the predictions.

“You’re looking for consistency of the models, and we’re starting to see that in terms of the general flow, in other words are we or aren’t we going to get into a freezer situation.

“At the moment I’m saying we are, so it’s not become the favourite. In a week’s time we will put more detail on the snow events from the continent, but it’s a bit of a headache to figure out who gets what at this point. It does make for high potential of a very white Christmas though.”

Mr Dale concluded that we are “in the melting pot”.

“I can tell you that energy use is going to only go in one direction.

“Preparation is everything, think about cars and clothing.

“The beast from the east has woken up and has its eyes on Europe and when we get to December it will increase in size. That’s what we’re saying at this moment in time.”