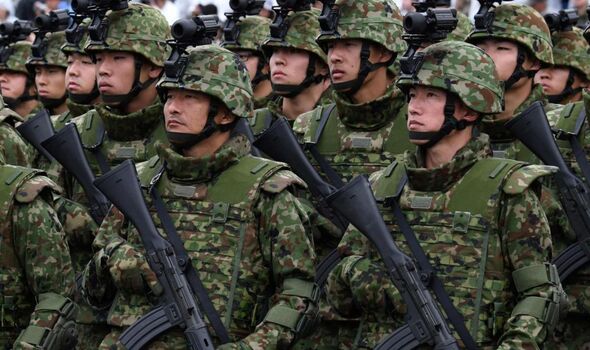 North Korea has accused Japan of secretly formulating plans for an invasion after Tokyo made moves to boost defence spending in the face of regional tensions and provocative missile tests by Kim Jong-Un’s regime. The state media in the country reported the foreign ministry describing how Tokyo had caused a security crisis on the Korean Peninsula and in East Asia.

It accused Japan of creating “a new security strategy formulating the possession of the capability for preemptive attack on other countries”.

The Korean Central News Agency quoted the official as saying: “The foolish act of Japan seeking to gratify its black-hearted intention, arms build-up for re-invasion, under the pretext of the DPRK’s legitimate exercise of the right to self-defence can never be justified and tolerated.”

DPRK refers to the Democratic People’s Republic of Korea, the country’s official name.

This would allow it to attack enemy bases and command-and-control centres with long-range missiles.

It also decided to double its defence budget to roughly 2 per cent of gross domestic product within five years.

The historic move fundamentally changes the defence posture adopted by Japan under its postwar pacifist constitution.

The decision drew praise from the United States but condemnation from China, which Japan has described as its “greatest strategic challenge ever”.

“Our country will continue to take actions to show how much we are concerned and displeased with Japan’s unjust, greedy attempt to realise its wild ambitions,” the ministry statement added.

Lim Soosuk, South Korea’s foreign ministry spokesman, said that Seoul wanted Tokyo to seek its consent if it planned to take any actions — such as the use of pre-emptive strikes on the Korean peninsula — that would affect South Korean national security.

Pyongyang’s latest statement came a day after it claimed to have conducted an “important, final phase” for the development of a spy satellite that it hopes to complete by April.

It said a vehicle carrying a mock satellite had been launched to an altitude of 310 miles.

In a different state media report today, Kim Yo-jong, the leader’s sister and a senior figure in the Workers’ Party of Korea, dismissed doubts about the state of the country’s spy satellite programme and hinted at a new test of an intercontinental ballistic missile.

“At this time when our right to existence and development is being threatened, how can we stop our advance for fear of sanctions that we have experienced abominably, not for the first time,” she said.