Home » World News » Not so normal! Biden ridiculed as US leader tries to shake hands with air – VIDEO

An awkward video shows Joe Biden seemingly forgetting to have already shaken hands with Senate Majority Leader Chuck Schumer and reaching out his hand for a second time. The US leader, together with other US officials, was the first to be greeted, but after the initial interaction with the Senator, he appears to immediately forget and wait for another handshake.

The video put President Joe Biden on the spot again as it shows the US leader struggling to remember he had already shaken hands with Senator Chuck Schumer.

After a round of applause, Mr Schumer turned backward toward Mr Biden and other US officials, including Speaker Nancy Pelosi.

Once close to Joe Biden, the US Senator appears to reach the US leader’s right hand and then move towards the other officials.

Once all the officials had been greeted, Mr Biden is seen lifting his hand ready to shake hands with the Senator for a second time. 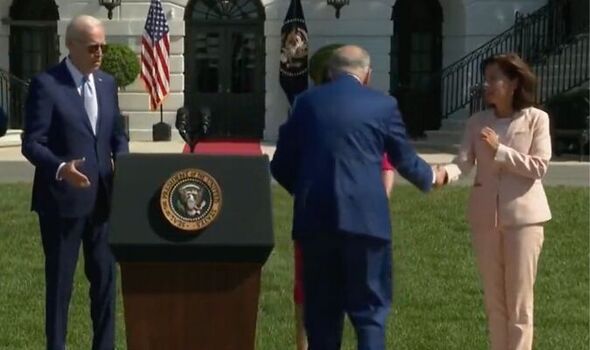 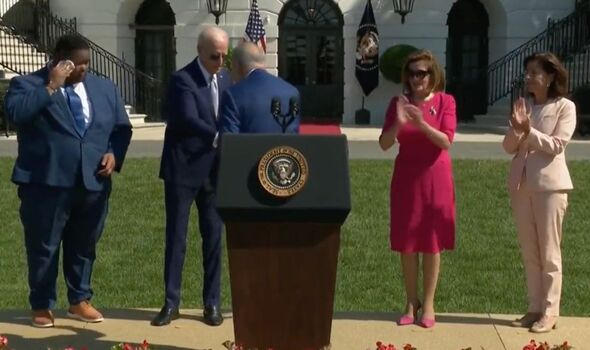 Mr Schumer, who seems not to notice the US President’s second attempt, turned back to the ledger and kicked off his speech.

Joe Biden is then seen moving his hand to touch his chin only as the Senator started to address the audience.

The encounter took place during the signing ceremony of the CHIPS and Science Act in 2022.

“But few seconds later, he puts his hand out to shake Chuck Schumer’s hand again. Not so normal.”

User @EdlyTampa wrote: “I’ve done much better than this after lots of drinks”.

@GrantDenton3 reacted: “Sad and terrifying at the same time”.

Ted Cruz adviser Steve Guest commented: “All it takes is like 5 seconds for Joe Biden to forget he shook Chuck Schumer’s hand. Scary.”

@Superspurs131 added: “Blimey…. Biden and Trump have to be the worst presidents in modern times… How can a country as big as America get it so wrong twice?”

Other users however dismissed the criticism suggesting Mr Biden was merely pointing towards the ledger to invite Mr Schumer to begin his speech. 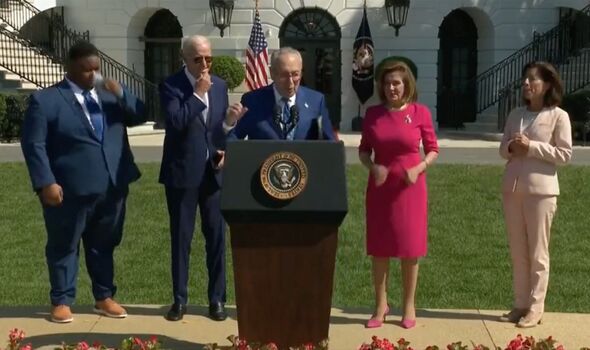 @rebekahkfreitas said: “He wasn’t going to shake his hand again he was gesturing towards the podium.

Something is so deeply wrong with you guys.”

@thotseeds added: “Chillax. He wasn’t sure what the cameras would edit.

“If he skipped Schumer, y’all would be shouting about a rift between them, and cutting their initial handshake! He knows he’s on a stage where every move is analyzed!”

The video comes a few days after Joe Biden was seen struggling to wear his own jacket and asking his wife Jill for help while stepping off the Marine One helicopter in Kentucky.

In the clip that recorded the scene, Ms Biden is seen coming to rescue her husband and helping him wear his jacket.

President Biden has been dogged by persistent blunders since the early days of his presidency in 2021.

In light of the previous video and the current one, Twitter user @jfyfe commented: “He had trouble with his jacket recently too – his speeches seem ok tho”.

READ NEXT:
VDL threatened to be kicked out as she refuses to dish out cash
Brexit: Ministers ‘filling jobs with foreign workers’
Europhile shut down after bitter Brexit attack on Tory Brexiteers
Oil price crash: Jubilation for UK motorists as oil falls to £74
Police launch urgent appeal in hunt for gang of youths