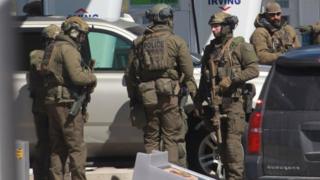 She hid from him in the woods overnight, and has become a key witness in the ensuing investigation.

They say he knew several of his victims, but also targeted strangers and good Samaritans who intervened.

In an update provided by the Royal Canadian Mounted Police (RCMP) on Friday, Superintendent Darren Campbell called those bystanders killed trying to help others “heroes”.

Wortman wore an authentic police uniform and was driving a convincing replica of a police vehicle for many hours during the crime spree, which added to the “confusion,” said Supt Campbell.

Police have not determined a motive, nor do they know to what degree the killings were planned. They said they believe many of his weapons were obtained illegally in the US.

Wortman died in a shootout with police at a petrol station in Enfield at around 11:30am local time 19 April.

What emerged on Friday?

The crimes began in Portapique, Nova Scotia on 18 April, and police arrived around 10:30pm after receiving reports of gun shots. They found several bodies strewn about a small neighbourhood, and multiple homes engulfed in flames.

They also encountered a driver who had been shot by someone driving a police cruiser.

They searched for the suspect overnight. The following morning, around 6am, his girlfriend emerged from the woods and told police that he had assaulted her, and that he was armed and had several replica police vehicles.

Supt Campbell said her assault was significant, and “could very well have been a catalyst” for the subsequent murders, although he said it is also possible they were premeditated.

Many have questioned why police did not send out an emergency alert as early as Saturday evening, when they first heard reports that there was a shooter impersonating a police officer.

Supt Campbell told media he did not have a “crystal ball answer”, but said that at the time, they believed they had located all three of his replica vehicles.

It was only after they spoke to his girlfriend that they learned there was a fourth, he said.

RCMP officials say they were preparing an emergency alert on Sunday when Wortman was shot and killed in Enfield.

Who were the victims?

Among the dead were a teacher, a home care nurse working on the frontlines of the coronavirus pandemic, and an RCMP officer.

A national virtual vigil will be held this week to honour the victims of the shooting, as the province is locked-down due to the virus.

The first victim made public was Const Stevenson, a 23-year veteran of the force and a mother of two.

Another was Heather O’Brien, who was caring for the elderly with the non-profit Victorian Order of Nurses (VON), during the provincial-wide lockdown before she was killed near her hometown of Debert, Nova Scotia. Another VON employee, Kristen Beaton, was also killed.

Lisa McCully, a mother of two, was among the victims. McCully had been a school teacher at Debert Elementary School, according to the school’s website.

Not all the victims – both men and women, according to police – have been named.

Sean McLeod and his partner Alanna Jenkins were among those killed. Their neighbour, Tom Bagley, also died, apparently while checking in on the couple on Sunday morning.

“He died trying to help, which if you knew him, you knew that was just who he was all the time. I know he meant something to so many people,” his daughter Charlene Bagley said on Facebook.

An online fundraiser has been set up to help pay for the funeral costs of a family of three, Jolene Oliver her husband Aaron (Friar) Tuck and their daughter Emily Tuck.

Married couple Jamie Blair and Greg Blair were killed on Sunday, according to a relative.

“My family has been through so much, no one should have ever had to deal with this. I love you both so much, & sending all my love to my family & every other families who lost someone today,” said Jessica MacBurnie on Facebook.

One police officer – Const Chad Morrison – was injured during the rampage but is recovering.