Mr Kotin, who heads Enerhoatom, said 500 Russian soldiers were at the plant and they are treating it “like a shield.” The stark warning comes as the Ministry of Defence warned Moscow is reinforcing defences in southern Ukraine.

Kyiv has vowed to push the Kremlin’s killers out of Southern Ukraine, with Zelensky targeting the liberation of Kherson.

But as the offensive intensifies, Russian forces have turned Europe’s biggest nuclear power plant into a temporary base. 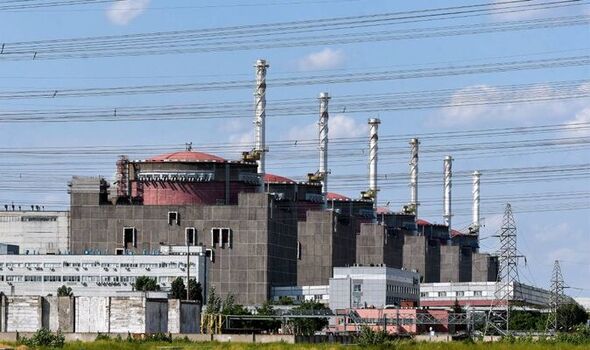 Artillery has been placed inside the compound and is being fired at Ukrainian troops.

The head of Ukraine’s nuclear power company, Petro Kotin, said: “They use it like a shield against the Ukrainian forces because nobody from Ukraine is going to do something,” Mr Kotin said.

He said Russia’s plans were to disconnect the plant from Ukraine’s grid and eventually connect it to Russia’s system.

But Moscow has renewed its offensive in eastern Ukraine,

Pavlo Kyrylenko, governor of the Donetsk region, said: “The situation in the region is tense – shelling is constant throughout the front line … The enemy is also using air strikes a great deal.

“The enemy is having no success. Donetsk region is holding.”

The Ukrainian military said Russian forces targeted Bakhmut and Avdiivka, but were repelled.

The Ukrainians also said they had wiped out Russian reconnaissance units.

Some of the places Russia is targeting like Pisky are heavily fortified settlements crisscrossed with tunnels and trenches where Ukrainian forces have long been dug in.

The Ministry of Defence said that Russia’s push towards the city of Bakhmut had been its most successful operation in the Donbas in the last 30 days, but said it had still only managed to advance around 6.2 miles.

In other areas in the east, Russia has advanced as little as 1.86 miles over the last month.