At least one person was killed and 590 wounded in Kyrgyzstan in unrest overnight, the embattled government has said, as protests grip the country following controversial parliamentary elections.

There were no further details on the government’s claim of casualties, which Al Jazeera is attempting to independently verify.

Local media said Kyrgyzstan’s central election commission on Tuesday annulled the results of the October 4 parliamentary election – something the opposition had been calling for. The vote had handed victory to two establishment parties.

The move follows claims by the opposition that it has seized power.

Burned-out cars littered Bishkek on Tuesday morning after protesters took control of the main government building, known as the White House, which briefly caught fire before emergency services put out the blaze.

Kyrgyzstan’s parliament will try to convene for an emergency meeting on Wednesday, local news website 24.kg reported, citing lawmakers who failed to gather a quorum on Tuesday.

On Tuesday, President Sooronbay Jeenbekov appealed for calm and said the country, which hosts a Russian airbase and a large Canadian-controlled gold mine, was facing an attempted coup d’etat.

However, he ordered security forces against opening fire on protesters.

The opposition said it had freed Almazbek Atambayev, a former president jailed on corruption charges, and was already discussing the lineup of a provisional government.

It was not clear what role, if any, Atambayev would receive, and Jeenbekov showed no immediate signs of relinquishing power. 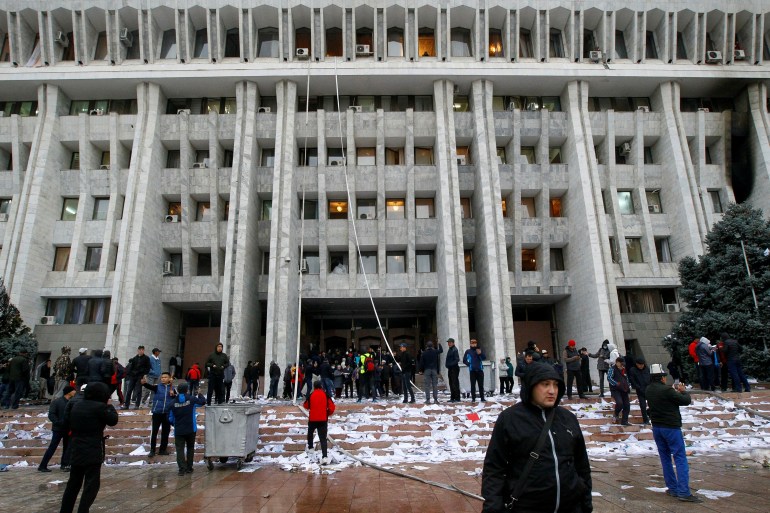 People protesting against the results of a parliamentary election stand in front of the government headquarters which has been taken over in Bishkek, Kyrgyzstan [Vladimir Pirogov/Reuters]Debris from inside, including government papers, and office furniture, was strewn outside after protesters ransacked parts of the building.

Interior Minister Kashkar Junushaliyev did not show up for work on Tuesday, a ministry spokesman said, saying that Kursan Asanov, an opposition politician and a former senior security official, had taken over as acting interior minister.

Police had been ordered to ensure citizens’ safety and prevent clashes and looting, the spokesman said. 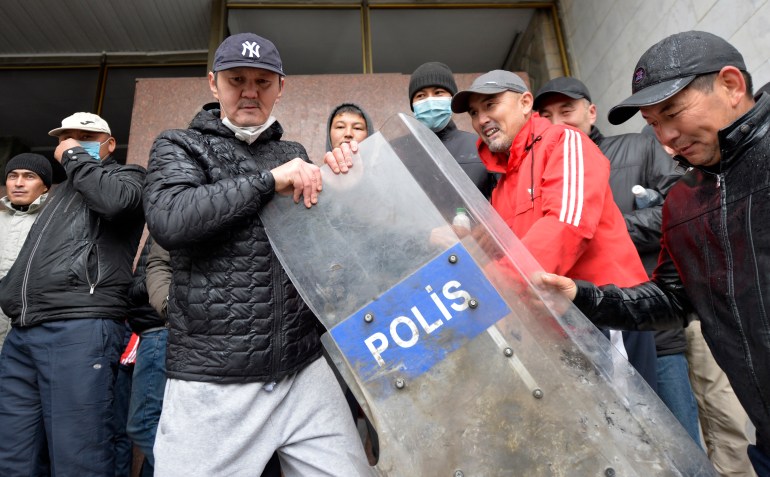 Protesters have clashed with police in Kyrgyzstan’s capital during a demonstration against the results of a parliamentary election[Vladimir Voronin/AP]Protesters also freed several former senior officials jailed under Jeenbekov, including ex-Prime Minister Sapar Isakov and Atambayev’s former chief of staff Farid Niyazov.

Jeenbekov’s supporters were gathering in the southern city of Osh, where his brother Asylbek Jeenbekov called for unity and order. 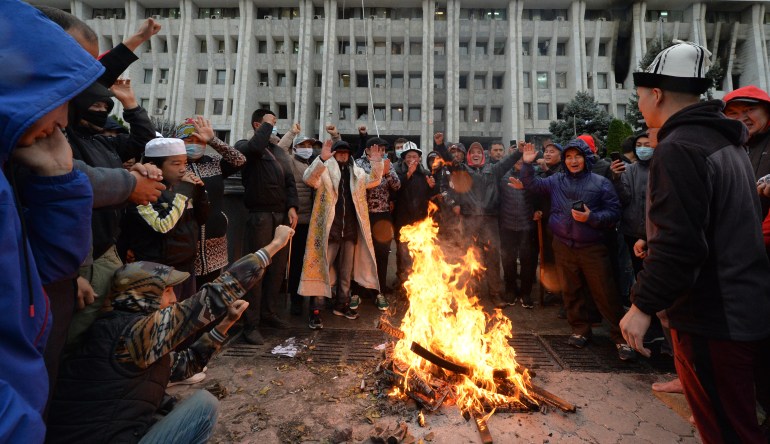 Kyrgyzstan is deep in a political crisis with its pro-Russian president insisting he was in control despite protesters capturing the seat of government and freeing his predecessor and nemesis following violent clashes with police [Vyacheslav Oseledko/AFP]Opposition groups also took over other buildings, including the mayor’s office, and appointed their own acting head of national security, acting prosecutor general and a commandant of Bishkek, though it was unclear how much actual power they wielded.

Jeenbekov’s office said in a statement that the president was “in control of the situation and expresses confidence that all political forces will put the interests of the country above their own”.

Al Jazeera’s Charles Stratford said the situation on the ground was “very fluid”.

“We are hearing various reports that opposition leaders and supporters claiming they have various control of ministries and state institutions,” he said, reporting from Bishkek.

“It’s also important to recognise that in the run-up to the election we had healthy debates not only between the opposition and the pro-government parties but also among the opposition groups too.”

However, he said the unity among opposition groups has started to splinter.

“Yesterday, opposition party leaders told their supporters to put down their flags and raise the flag of Kyrgyzstan. But 24 hours later, the situation on the ground is very different and we are beginning to see splits in that unity and potential rivalries in and amongst rival opposition groups.”

Kyrgyzstan, which borders China and is a close ally of Russia, has long been a platform for geopolitical competition between Moscow, Washington and Beijing.

It has a history of political volatility – two of its presidents have been toppled by revolts in the past 15 years.