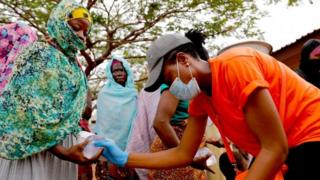 In our series of letters from African writers, journalist and former Ghana government minister Elizabeth Ohene writes about the new normal – from how to hold a socially distant election to attending online funerals.

Since the outbreak of Covid-19, we have come to accept that our lives have been turned upside down.

We have been learning to cope with things nobody had ever dreamt about – like not hugging or shaking hands. Social distancing, self-isolation and quarantine have all become terms of everyday use.

Schools have been closed, and parents are discovering anew just how much food growing children eat.

There are things we studiously avoid talking about; the mortuaries are full, not from coronavirus deaths (so far in Ghana, there have been 16 from the disease) but the ban on public gatherings, which means we cannot have normal funerals.

Private burials are allowed but with no more than 25 people and that really is an unbearable experience for most Ghanaians.

So, we are keeping the bodies in the morgues in the hope that this dreadful nightmare will soon be over and the dead can be given befitting Ghanaian burials.

Funeral services are going hi-tech to abide by the new restrictions. The service has the prescribed 25 or less people and the proceedings are streamed online. Many people now sit at home by their laptops and log on to join the service.

If this trend continues, it will totally subvert our funeral culture. I joined an online funeral last week dressed in a pair of jeans and a T-shirt. Nobody attends a funeral dressed like that.

Now that we have gone through seven Sundays, including Easter Sunday, without church services, it is dawning on all of us that coronavirus is rather dramatic.

We are into the holy month of Ramadan. Muslims have started their fasting, without the congregational prayers in the mosque that mark the breaking of the fast. More and more of us now accept that we are in unsettling times.

The capital Accra and its environs, and the second city Kumasi, were put under lockdown for three weeks and we have emerged from that too with the restriction on the movement of people now lifted.

At the centre of the entire Covid-19 experience has been President Nana Akufo-Addo. He addressed the nation on the evening of 12 March to tell us of the first two cases of coronavirus in the country.

He announced the ban on social gatherings, the closure of borders, the lockdown in the two metropolitan areas, and he enumerates the tally of confirmed cases of infections. There is an unstated but awkward fact that runs underneath all the frantic coronavirus activities in the country. We are due to hold presidential and parliamentary elections on 7 December.

Elections are keenly contested here and campaigns are usually loud, chaotic and, of course, crowd-centred. Preparations were on a tight schedule and did not leave much room for anything to go wrong.

Then the virus struck and the first casualty was the National Identification Authority. It has not yet been able to finish giving identity cards to everybody above the age of 16. Without it, people cannot register to vote.

The electoral commission wants to compile a fresh voters register, but the opposition National Democratic Congress (NDC) is having none of that and has sworn loudly that it will do everything it can to make sure it does not happen.

The commission had, in fact, planned to start the registration process more than a week ago, but since all gatherings are banned, it seems to be stuck.

Furthermore, the two main parties are gauging each other as the nature of politicking has changed with the advent of coronavirus.

No-one knows if the people’s judgement is going to be based mostly on how the parties and their candidates fare during this crisis.

The candidate of the ruling New Patriotic Party (NPP), President Nana Akufo-Addo, and the NDC candidate, former President John Mahama, know each other pretty well. This is going to be the third time they will be facing each other.

The NPP should have conducted primaries in about 150 constituencies in which it has sitting MPs last December but postponed them to April – only for them to be derailed by lockdown measures. The candidates cannot campaign, at least not in the manner we know.

Party officials are in a bind, will they be able to hold primaries and how will they manage the tensions that come with internal elections if there is no time to heal wounds?

The NDC has most of its parliamentary candidates but its presidential candidate would have wanted to announce his choice of running mate at a big rowdy event – not at an event dominated by social distancing.

And how do you campaign when a malignant virus loose in the land and there does not seem to be any appetite for partisan arguments?

The president has addressed the country eight times since the outbreak and the whole nation listens to him.

The president says the virus does not have a political colour, this is not the time for politicking, and right now we must defeat our common enemy. He is having a good pandemic.

The NDC started its Covid-19 politicking on a dodgy note when its general secretary, Asiedu Nketia, expressed doubts about the existence of the virus in the country.

When Mr Nketia announced the first two cases of Covid-19 and placed a ban on social gatherings and political activities, he said the virus was a big hoax, and part of a grand design by the president to rig the elections.

But the NDC soon regained its poise and the party set up its own Covid-19 committee and Mr Mahama started issuing his own daily bulletins on the progress of the virus.

He had a digital conversation the other day, which sounded suspiciously like an address to the nation.

One week into the lockdown, tempers began to fray, small businesses were feeling the pinch, the daily wage earners were in distress and the confirmed cases of Covid-19 were rising.

An NDC MP accused government officials of asking the vulnerable for NPP party membership cards before being given food.

A video was released of Mr Mahama distributing food parcels in a poor suburb. He was appropriately clad in his face mask and told the recipients he knew they were suffering and could feel their pain.

The president announced a raft of interventions to ease the economic difficulties brought on by the pandemic; the government would pick up 50% of everybody’s electricity bill for the next three months, water would be free during that period, and health workers would not pay taxes.

Last Sunday, Mr Akufo-Addo announced the government was about to start a huge hospital building programme. He said the pandemic had exposed just how badly underserved we were with hospitals and he would build and equip 94 new ones within the next year.

We had not seen the president as a Father Christmas before but there he was dishing out goodies. For the NDC, it is difficult when it wants to defeat him in elections.

Since nobody has any idea when we will get rid of this virus and there are no provisions in the constitution to postpone presidential elections, we are having to work around the possibility of holding the polls with Covid-19 around us.

South Korea did it and we might have to do it as well, socially distanced and with our masks.