U.S. Vice President Mike Pence on Wednesday refused to address how White House officials and lawmakers — including himself — failed to follow public health measures at an event linked to multiple coronavirus cases.

During the vice presidential debate with Democratic Sen. Kamala Harris, Pence was asked by moderator Susan Page why Americans should be expected to follow federal guidelines such as mask-wearing and social distancing, when those measures were barely seen among attendees in the Rose Garden on Sept. 26.

That event, meant to mark President Donald Trump’s nomination of Amy Coney Barrett to the Supreme Court, has been called a “superspreading” event, with nearly a dozen attendees later testing positive for COVID-19.

Pence instead spoke largely about Americans’ ability to make their own choices, without acknowledging his own role in the event, at which he sat in the front row with his wife, Karen.

“Many of the people who were at that event actually were tested for coronavirus, and it was an outdoor event, which all of our scientists regularly and routinely advise,” he said.

“The difference here is, President Trump and I trust the American people to make choices for the best interest of their health. Joe Biden and Kamala Harris consistently talk about mandates, and not just mandates about the coronavirus. … We’re about freedom and respecting the freedom of the American people.”

Harris immediately blasted Pence’s answer and what she called the “ineptitude” of the Trump administration’s coronavirus response. She zeroed in on Trump’s admission to journalist Bob Woodward that he wanted to “play down” the threat the pandemic posed, while sharing critical details with Woodward about the virus’ severity that he did not share with the public. 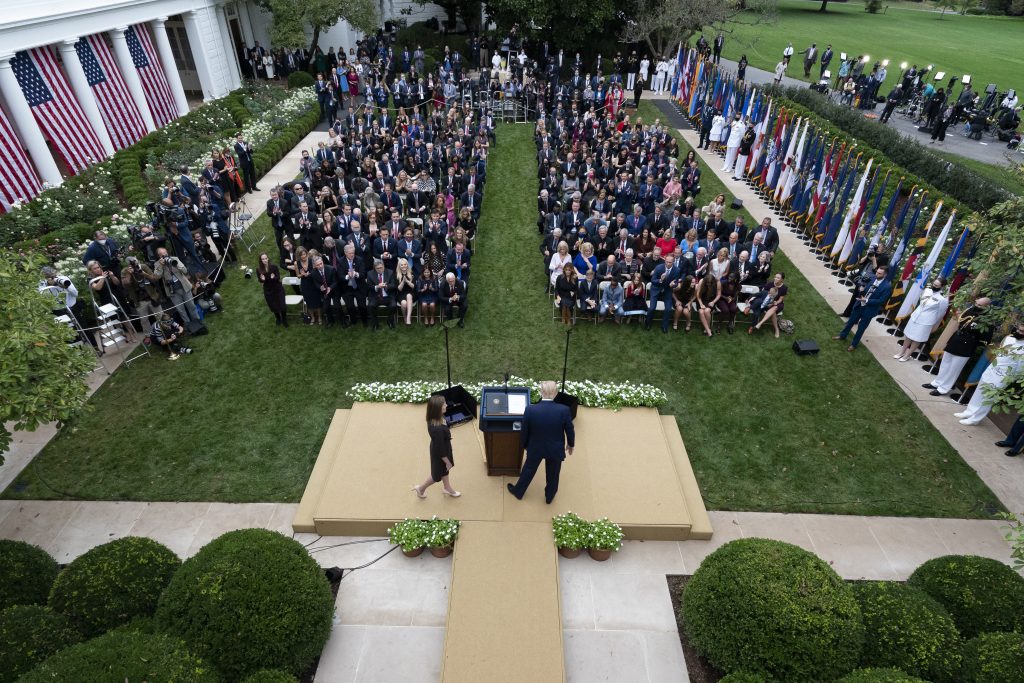 The White House has so far failed to contact trace those cases and others that have popped up within the White House and among Trump’s senior staff. Health experts have said that refusal, along with the continued lax attitude towards masks and social distancing, means there could be several more cases within the government.

Senior military members and Pentagon officials, including the chairman of the Joint Chiefs of Staff, are self-isolating after another White House event — this one held indoors — that was held without proper health measures.

The Centers for Disease Control and Prevention says people should stay at least six feet apart from anyone who doesn’t live in their household when outside. In the Rose Garden and at other recent White House events — as well as at Trump’s campaign rallies in multiple cities — attendees have sat or stood shoulder-to-shoulder, with hardly anyone wearing masks.

Trump himself has barely worn a mask and removed it from his face upon returning to the White House on Monday after three days of hospital care for COVID-19.

The debate saw Pence, who leads the White House coronavirus task force, defend the federal response to the pandemic, including shutting down travel from China.

He also would not answer Page when asked why the U.S. has the highest percentage of coronavirus cases and deaths in the world.