BEIRUT (Reuters) – Lebanese riot police fired tear gas at demonstrators trying to break through a barrier to get to the parliament building in Beirut on Saturday during a protest over the government’s handling of this week’s devastating explosion in the city.

About 7,000 people gathered in Martyrs’ Square in the city centre, some throwing stones. Police fired tear gas when some protesters tried to break through the barrier blocking a street leading to parliament, a Reuters journalist said.

Ambulances rushed to the scene. One teenager fainted after being overcome by tear gas.

The protesters chanted “the people want the fall of the regime”, a popular chant during the Arab Spring uprisings of 2011. “Revolution. Revolution.” They held posters saying “Leave, you are all killers”.

Soldiers in vehicles mounted with machine guns patrolled the area amid the clashes.

“Really the army is here? Are you here to shoot us? Join us and we can fight the government together,” a woman yelled.

Tuesday’s blast, the biggest in Beirut’s history, killed 158 people and wounded 6,000, the health ministry said. Twenty-one people were still reported as missing from the explosion which destroyed a large swathe of the city.

The government has promised to hold those responsible to account. But few Lebanese are convinced. Some set up nooses on wooden frames as a warning to Lebanese leaders.

“Resign or hang,” said a placard.

Some residents, struggling to clean up shattered homes, complain the government they see as corrupt – there had been months of protests against its handling of a deep economic crisis before this week’s disaster – has let them down again.

“We have no trust in our government,” said university student Celine Dibo as she scrubbed blood off the walls of her shattered apartment building. “I wish the United Nations would take over Lebanon.”

Several people said they were not surprised that French President Emmanuel Macron had visited this week while Lebanese leaders had not.

“We are living in ground zero. I hope another country would just take us over,” said psychologist Maryse Hayek, 48, whose parents’ house was destroyed in the explosion.

Lebanon’s Kataeb Party, a Christian group that opposes the government backed by the Iran-aligned Hezbollah, announced on Saturday the resignation of its three lawmakers from parliament.

“I invite all honourable (lawmakers) to resign so that the people can decide who will govern them, without anybody imposing anything to them,” said party chief Samy Gemayel, announcing the move during the funeral of a leading member of the group who died in the explosion.

Macron, who visited Beirut on Thursday, promised angry crowds that aid to rebuild the city would not fall into “corrupt hands”. He will host a donor conference for Lebanon via video-link on Sunday, his office said. U.S. President Donald Trump said that he will join.

The prime minister and presidency have said 2,750 tonnes of highly explosive ammonium nitrate, which is used in making fertilisers and bombs, had been stored for six years without safety measures at the port warehouse. 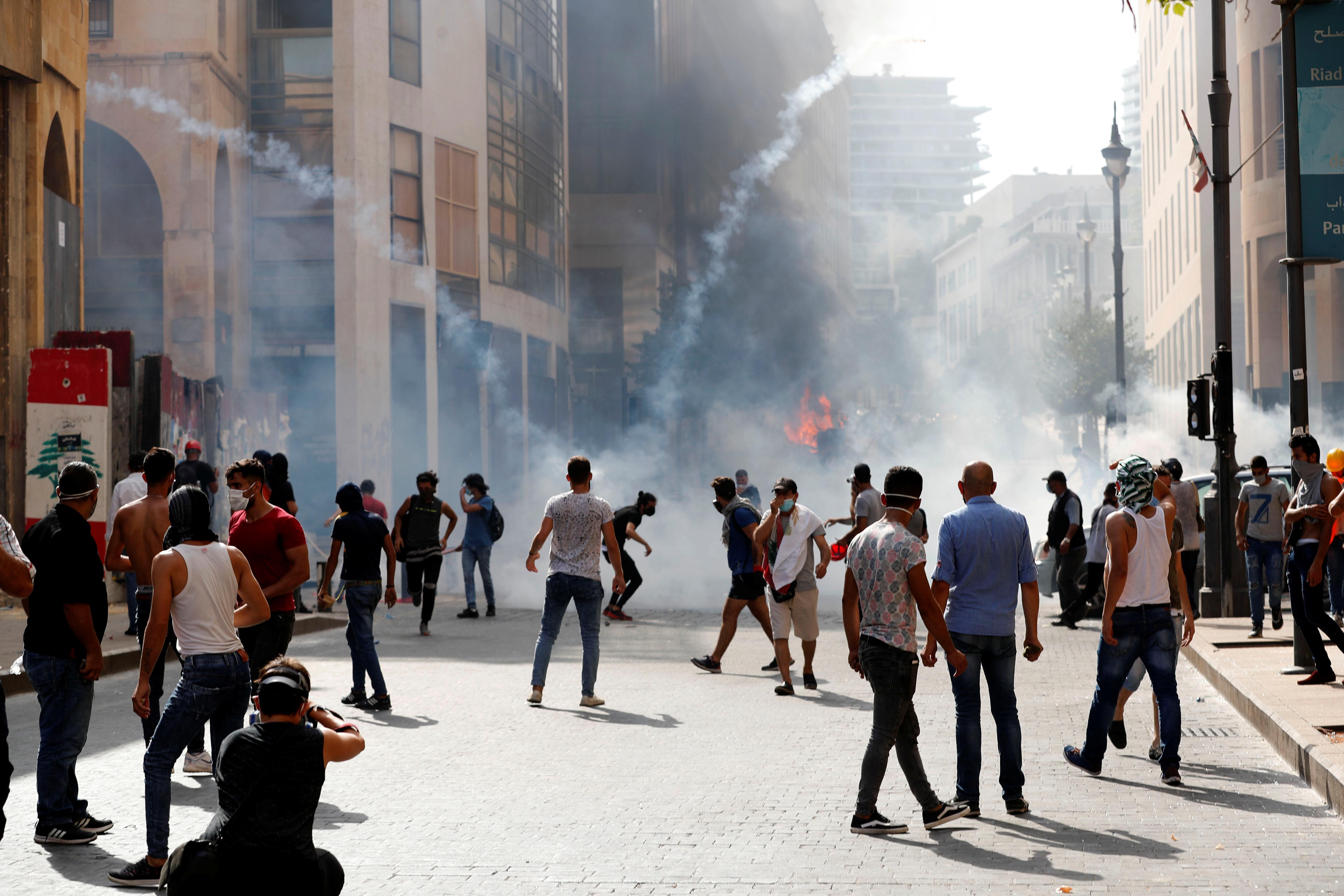 ‘WE CAN’T AFFORD TO REBUILD’

Some residents wondered how they would ever rebuild their lives.

Tearing up, Bilal Hassan used his bare hands to try to remove debris from his home. He has been sleeping on a dusty couch besides pieces of splintered glass.

When his three wounded teenage children ran for their lives they left blood stains on the staircase and walls.

“There is really nothing we can do. We can’t afford to rebuild and no one is helping us,” he said, standing beside a large teddy bear that was blown across his home, and a damaged photograph of him and his wife.

Bulldozers ploughed through the wreckage of mangled homes and long rows of flattened cars as soldiers stood by. Volunteers with shovels streamed through streets.

Danielle Chemaly said her charity organisation, whose headquarters was destroyed, had provided assistance to 70 families who were left homeless.

“We have given people initial help but we don’t know what we can do for families in the future. It requires major projects,” she said.

Officials have said the blast could have caused losses amounting to $15 billion. That is a bill that Lebanon cannot pay after already defaulting on a mountain of debt – exceeding 150% of economic output – and with talks stalled on a lifeline from the International Monetary Fund.

France and other countries have rushed emergency aid to Lebanon, including doctors, and tons of health equipment and food. The blast destroyed Lebanon’s only major grain silo and U.N. agencies are helping provide food and medical aid.

For ordinary Lebanese, the scale of destruction is overwhelming. 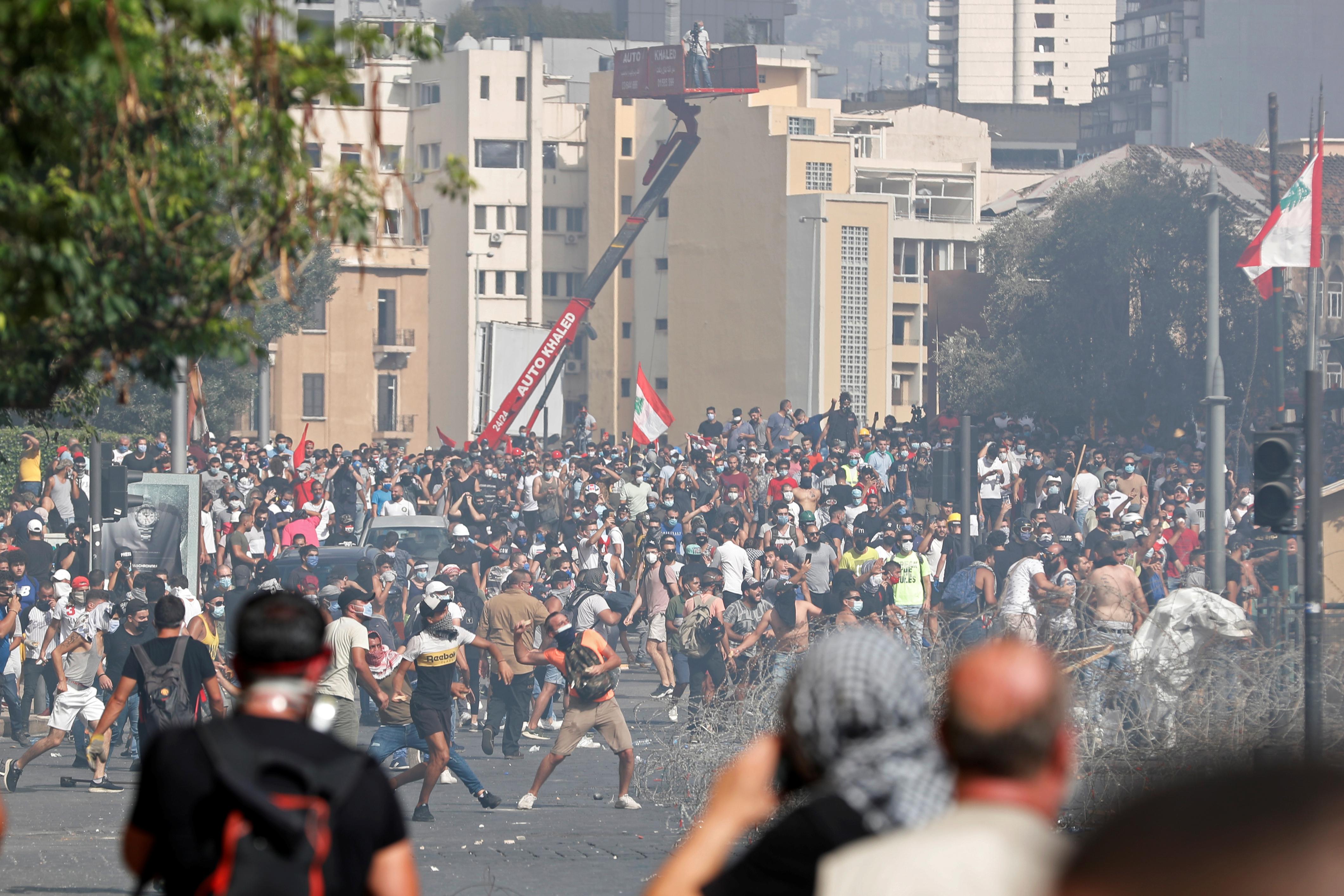 “It felt like a mini atomic bomb,” said George Rohana, sitting beside a supermarket that was demolished.

Marita Abou Jawda was handing out bread and cheese to victims of the blast.

“Macron offered to help and our government has not done anything. It has always been like that,” she said. “After Macron visited I played the French national anthem all day in my car.”