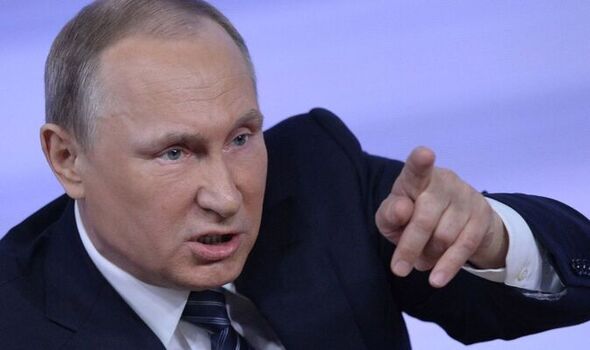 It reported on its Twitter account: “Poland wants to seize territories in western Ukraine. Russia could be the only guarantor of Ukraine’s territorial integrity, Putin says.

“Nationalist elements in Poland ‘sleep and see’ in order to take western Ukraine, which Ukraine received thanks to Stalin’s decisions after WW2.

“This will be the case, the only real guarantor of Ukraine’s territorial integrity within its current borders could be Russia – Putin.”

Roman Starovoyt, the Governor of Kursk, had blamed the attack on a Ukrainian drone, but Ukraine has not taken responsibility for the strike.

The media organisation said: “At this point, the five-ton tanks were empty and a serious fire was avoided.”

Kursk’s Governor, Mr Starovoyt, said there were no casualties but that fighters had been tackling a 500 square-meter blaze.

On Tuesday afternoon, it was confirmed that Putin had met with his Security Council to ensure discuss Russia’s “domestic security” after the drone strike.

When asked how the drone strikes by reporters, Mr Peskov said: “Of course, the line openly declared by the Ukrainian regime to continue such terrorist acts is a danger factor.”

The drone strike on Tuesday is the second drone attack in Russia this week, as Russia’s Defense Ministry reported that Ukrainian drones had attacked two airbases on Monday.

The drone strikes are significant as they would be the farthest into Russian territory Ukraine has managed to attack since the war began.

The attacks took place at the Engels-2 and Dyagilevo airbases in Saratov and Ryazan, which caused two aircrafts to be damaged

Ukraine has also not claimed responsibility for the attack, however, a senior Ukrainian official spoke to the New York Times and said the drone attack had been launched from Ukraine’s territory.