Tens of millions of tons of wheat exports are trapped in Black Sea ports due to the restrictions. 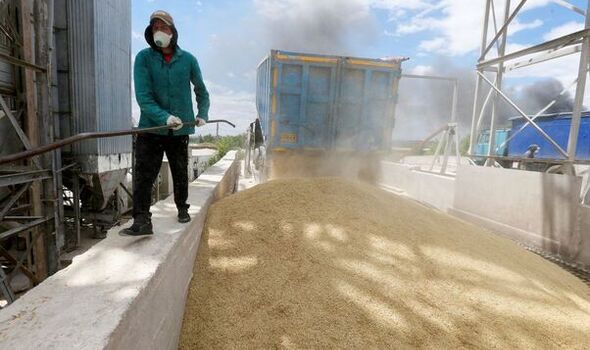 With the EU now set to ease some sanctions on Moscow’s banks as part of a deal to break the impasse, Putin admitted there was “movement” in relation to the grain.

The Kremlin leader said progress had been made that might now allow Russia to lift the blockade, an issue that has been threatening famine across Africa.

The exports currently face waterways littered with both Russian and Ukrainian mines and a safe passage will now have to be established before stocks can start to be shipped out again.

But, as part of the new agreement, Kyiv said it would still seek guarantees that its ports and vessels would not be targeted. Speaking in Tehran, Iran, Putin said he welcomed the progress.

“I want to thank you for your mediation efforts,” the Russian president told Recep Tayyip Erdogan, his Turkish counterpart, who is also in Tehran, in comments released by the Kremlin.

Putin said: “With your mediation, we have moved forward. Not all issues have yet been resolved, but the fact that there is movement is already good.”

It was only Putin’s second visit outside Russia since his invasion of Ukraine and reflected his determination to show he is not as isolated as the West claims.

He held talks not only with Erdogan, but also with the Iranian supreme leader Ayatollah Ali Khamenei, and Iran president Ebrahim Raisi. Khamenei offered Putin support over the Ukraine conflict, blaming Kyiv for sparking the invasion.

He said: “War is a harsh issue, and Iran is not at all pleased that ordinary people suffer from it. But in the case of Ukraine, if you had not taken the initiative, the other side would have caused the war with its own initiative.

“If the road is open to Nato, it knows no boundaries and if it was not stopped in Ukraine, they would start the same war some time later under the pretext of Crimea.” 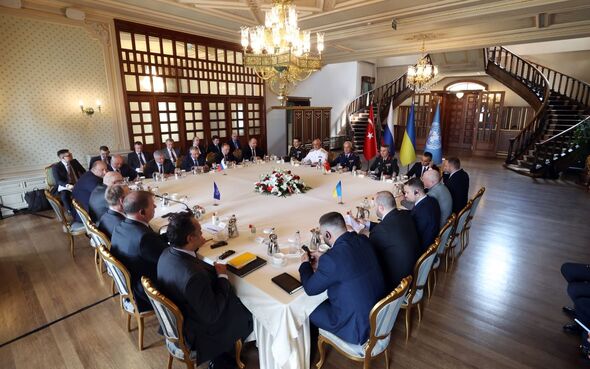 Putin was reported to have replied: “No one is in favour of war, and the loss of ordinary people’s lives is a great tragedy. But the behaviour of the West made us have no choice but to react.

“Some European countries said that they had been against Ukraine’s membership of Nato, but then agreed under American pressure, which shows their lack of independence.” After flying out of Tehran yesterday, Putin once again blamed Ukraine for the war.

He claimed Kyiv had not stuck to the terms of a preliminary peace deal he said had been “practically achieved” in March.

He added: “The final result depends on the willingness to implement the agreements. The powers in Kyiv have no such desire.”