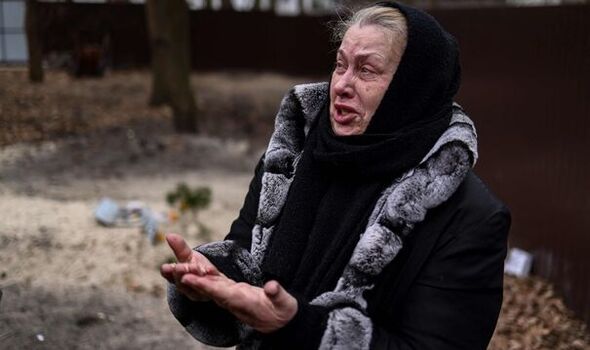 Bound bodies of Ukrainian civilians were strewn across the city’s destroyed streets by the Kremlin’s hired killers, it was claimed.

Staff at Germany’s BND spy agency intercepted radio chatter from Russian troops discussing the butchering of men and women near the capital Kyiv.

The transmissions referred to corpses seen in Bucha after its recapture by Ukraine – with one Russian boasting how he and others shot dead a civilian on a bicycle.

Another declared: “First question soldiers, then shoot them.”

The recordings were sent to the German parliament to further disprove Russian allegations that photos of the massacre, which caused global revulsion, were staged in a “monstrous forgery” after Putin’s forces fled.

The agents’ wiretap showed that Wagner Group operatives played a “key role” in the atrocities. The shadowy paramilitaries have been linked to war crimes around the world and are said to carry out Putin’s dirty work at an arm’s length from the Russian state.

The BND recordings appear to prove the Bucha killings were neither accidental nor done by individual out-of-control soldiers, since troops discussed the barbarity as if they were talking about their everyday lives.

Spy chiefs told German leaders the killings were normalised and part of a strategy intended to sow fear and terror among the civilian population.

Satellite imagery showed bodies in the streets while Kremlin troops were in control.

Other recordings from elsewhere in Ukraine are being analysed by intelligence chiefs “with great concern”. According to an audio clip released by the Security Service of Ukraine, a Russian commander barked at his troops during the assault on Mariupol: “Civilians, everyone, slay them all!”

Wladimir Klitschko, the former heavy-weight boxing champ whose legendary boxer brother Vitali is the mayor of Kyiv, condemned the massacre in Bucha as “genocide of the Ukrainian population”.

After bodies were pictured left among the ruins of Bucha further horror stories yesterday emerged from there and nearby Irpin, also devastated by Putin’s invasion. Locals said Russians shot civilians without provocation. Former engineer Hryhoriy Zamohylnyi, 84, who was born and raised in Bucha, said: “I saw the war with the Germans and now this war with the Russians. What you see here is animal cruelty.”

Ukraine’s foreign minister Dmytro Kuleba said Bucha was “the tip of the iceberg”.

More than 400 people are missing from Hostomel, eight miles north of Bucha. Officials said they vanished after Russian forces captured it early on in the war and held it for 35 days.

Taras Dumenko, head of the local military administration, added: “We are checking the basements of Hostomel together with the State Emergency Service and patrol police officers. We have about 1,200 residents with whom the contact has been established.”

He said Russian troops killed local mayor Yuriy Prylypko plus volunteers Ruslan Karpenko and Ivan Zoria, whose remains were found Mr Dumenko said: “Not many bodies have been found in Hostomel, but shot bodies, killed residents, were found further in the villages of our community. Several residents were also found in Bucha.”

“It is necessary to understood that the occupiers removed people. People from the village of Hlibivka came to Hostomel and then the contact with them was lost.

“But we need to understand that the occupiers also covered the traces of their crimes.”

The Kyiv regime claims Bucha, Irpin, Hostomel and the region around the capital have been retaken but mass killings of civilians by Russian soldiers have been recorded in liberated towns and villages. A mass grave unearthed in Bucha contained almost 300 bodies.

The eastern Ukraine cities of Donetsk, Luhansk and Kharkiv are now suffering the worst of the fighting following the Russian withdrawal from the centre of the country.

Mariupol in the south remains under siege with more than 100,000 people trapped in the besieged port. The civilian death toll there has risen to 5,000, including 210 children, according to local officials.