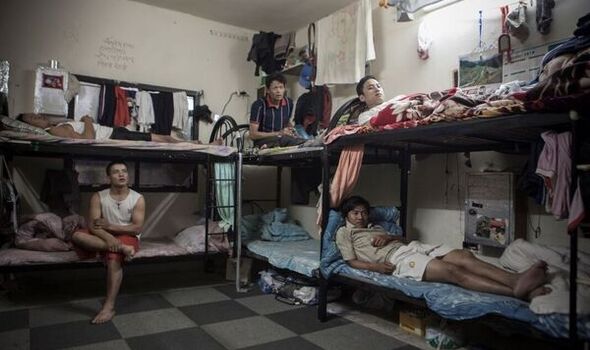 Qatar relies on migrant labour with 95 percent of the workforce coming from overseas. Of the two million migrant labourers currently living in the oil-rich state, a large portion is reported to be living in substandard conditions. The workers are housed inside dormitories in the so-called Industrial Area. The accommodation has been built specifically for migrant labourers who come to the country to work as security guards or construction workers who have contributed to the building of the $6.5 billion to $10 billion stadium.

During the height of the Covid-19 pandemic, the country came under significant pressure for housing migrant labourers inside these often overcrowded and unsanitary camps, where men lived cramped together side by side.

Despite Danish Football Association chief Jakob Jensen’s announcement this Thursday that he believes Denmark’s protest against Qatar’s human rights abuses has led to significant reforms, human rights organisations say it is too little too late.

The state did reform some working conditions in 2020 when it abolished the kafala system, which bound migrant labourers to an employer through a sponsorship system that gives an employer the sole right to terminate employment. This left people vulnerable with some employers confiscating the passports of workers who were then unable to leave abusive working environments.

Qatar also created a minimum wage, which has been criticised by photojournalist Pete Pattisson as “poverty pay” — the equivalent of just £1 per hour — and built new accommodations for labourers. Human rights organisations say these measures are not enough.

Human Rights Watch wrote in a statement accompanying the report:

“Key labor reforms introduced by Qatari authorities came too late or were too weakly implemented for many workers to benefit.”

“In May, Human Rights Watch and other human rights organisations, trade unions, and fan groups pressed FIFA and Qatari authorities in a Joint Open Letter and campaign to provide a remedy for the abuses workers have experienced, including financial compensation for wage theft or injuries, and to families of the deceased.”

Migrant workers have also spoken out against troubling working conditions. A TikTok video from May 2021 showed security guards holding a strike over salary cuts.

Poor treatment continues, particularly in relation to housing. Last month, thousands of migrant workers were evicted from their accommodations to give way to football fans. According to a Reuters report it left many people living on the streets outside their former accommodation.

Those still living inside dormitories in Qatar’s Industrial Area may have a roof over their head but their living standards are still cramped. Images depict little change to overcrowding and poor facilities, with some rooms housing up to eight men in bunkbeds in narrow rooms. The rooms provide shelter from the sun, but little solace from Qatar’s unbearable heat due to poor ventilation which can result in health conditions.