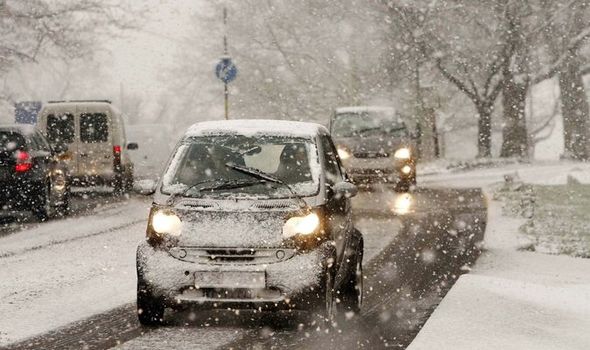 Weathermen warned the huge depression would sweep down from the north, bringing icy temperatures today.

The red warning covered Scotland and parts of northern England overnight, with lesser Amber and Yellow warnings for the rest of England, Wales and Northern Ireland.

Police Scotland warned motorists in areas covered by the alert to not travel “under any circumstances”.

London North Eastern Railway also last night issued a “do not travel” caution to customers, saying its services will be “significantly disrupted” until tomorrow.

Network Rail last night closed the East Coast route north of Berwick-upon-Tweed, Northumberland. While it will get little above 0C all weekend, strong winds will make it feel a lot colder.

A man died yesterday after his car was hit by a tree in Antrim, Northern Ireland.

Met Office spokesman Stephen Dixon said: “The worst affected areas will be on the coasts, with gusts of over 75mph bringing possible disruption to travel, power cuts, flying debris and large waves.”

He added: “Strong winds are likely into Saturday, when the warning is extended to most parts of the UK.”

The icy air stays into early next week, with temperatures hovering around zero.

Mr Dixon said: “There will also be the chance of snow in the coming days, especially in the higher regions of Scotland and northern England.”